More medicine is blessed with cures and treatments that were once considered pure science fiction.

Computerised scanners that can ‘see’ inside the body, robots that perform intricate surgery and man-made implants to replace worn out body parts are commonplace in contemporary health services. And now there are a range of high-tech devices that can monitor your health in the comfort of your own home. New technologies are excellent for encouraging patients to take an interest in their own health. They can be beneficial for patients with chronic conditions.

Some of the latest DIY health devices were showcased at the Consumer Electronics Show in Las Vegas, the biggest of its kind in the world. Here, we look at innovations in the pipeline and those already used by patients.

HOW CAN YOUR FRIDGE CHECK EATING HABITS

The fridge that monitors how often you open it is being used to try to ensure that dementia patients don’t become malnourished. Last year, a trial was launched by Surrey and Borders Partnership Foundation Trust to use new technology to monitor 1,400 people who have mild to moderate dementia.

It included sensors on fridge doors to check the number of times a day the patient opens it for food or drink. The sensors are connected wirelessly to the internet, so carers at an operations centre can track eating patterns.

A sudden decline in fridge opening could indicate the patient is not eating properly. And frequent night-time visits could mean they are not sleeping well. If there is a suspected problem, the centre can dispatch a carer or alert the patient’s doctor. Similar sensors are attached to patients’ kettles to check on drinking habits. A decline in use could signal they are struggling to look after themselves.

The trial, which runs until the summer of 2018, will help determine if the technology can cut unnecessary hospital stays resulting from malnutrition or dehydration.

HOW CAN SMART BED GIVE YOUR PARTNER A QUIET NIGHT

The 360 Smart Bed can adjust itself automatically to eliminate snoring. It has a mattress with sensors and microphones that can pick up the sound of snoring.

When we sleep, the muscles in the tongue and airway relax — in some people, the tissues relax too much and air has to be forced through the narrowed passage; this produces the snoring sound.

The sensors in the bed are linked to a motor in the frame of the bed, which can raise the head of the mattress by up to 45 degrees — this encourages the tongue to fall slightly forward, opening the airways again and easing the snoring.

The bed could be on sale next year.

HOW CAN TELEVISION SET TEST YOUR BLOOD PRESSURE

Some NHS patients no longer need to visit their GP for a blood pressure check — they just turn on the TV instead.

In a trial in Liverpool, patients with conditions such as diabetes — who are at increased risk of heart disease — are getting regular blood pressure and weight checks without even leaving the house.

Each patient is given a TV set-top box, or a computer tablet, that is connected wirelessly to a blood pressure cuff, a pulse oximeter that attaches to their finger (to measure blood oxygen levels, which show how well the heart is working) and to their bathroom scales. 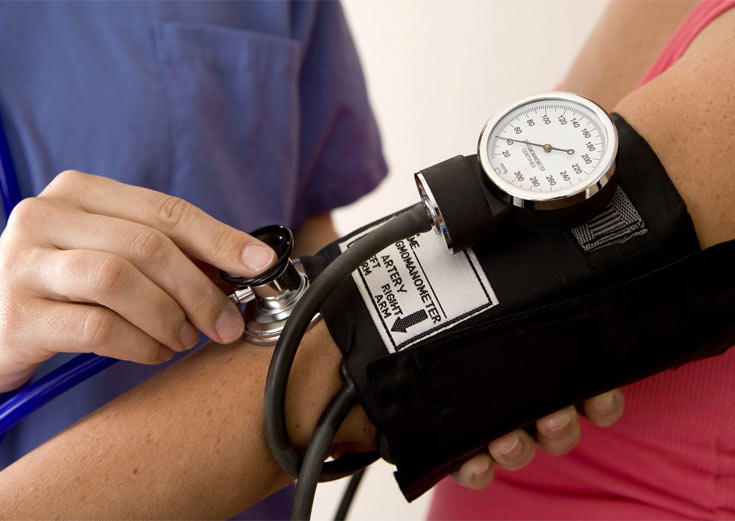 Patients have to use each daily and the results are sent wirelessly to the box.

Software in the TV box analyses the readings and alerts the patient to see a doctor — for example, if blood pressure increases significantly — or the TV screen displays targets for diet and exercise to reduce the risk of complications.

In the first three years of the trial, more than 2,200 patients with diabetes or serious heart and lung conditions were given the TV technology and hospital admissions for complications from their illnesses, such as severe breathless-ness, fell by almost a third.

THERE’S A KETTLE TO PREDICT YOUR LIFESPAN

A high-tech kettle in development could predict a person’s risk of dying prematurely by monitoring how strong their grip is.

Hand grip gives vital clues to a person’s frailty: a firm grip is thought to indicate strong muscles and even healthy blood vessels. Someone with strong hand and arm muscles is likely to also have strong leg muscles — vital for good balance — and also likely to be more active and have better cardio- vascular health. Weak grip suggests the body is less likely to withstand the effects of major illnesses such as heart disease or cancer. 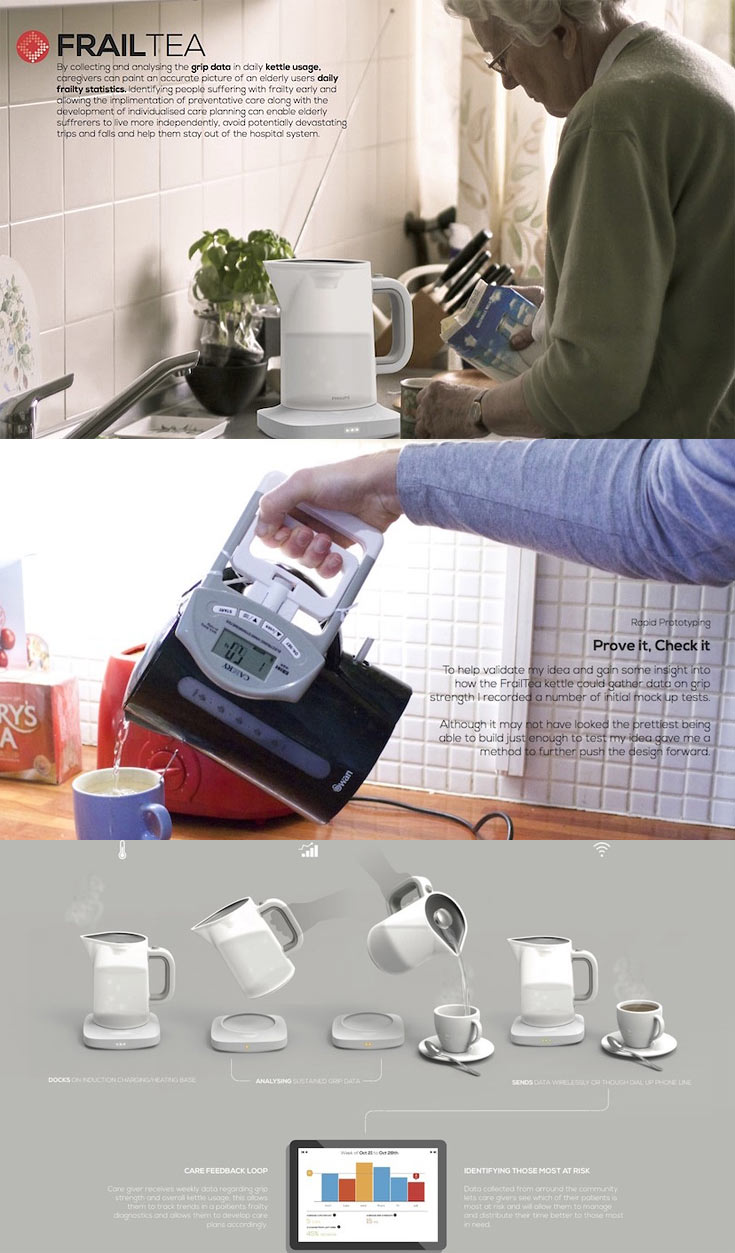 A study published in The Lancet found grip strength was more accurate at predicting premature deaths — from conditions such as heart disease — than regular blood pressure measurements. The participants’ grip strength was measured using a hand-held device called a dynamometer.

A healthy man can grip as hard as 50kg, while women have a grip of around 40kg. The researchers found for every 5kg reduction in grip strength, the risk of premature death rose by 16 per cent.

Now electronics giant Philips is looking to commercialise the high-tech kettle, which is called FrailTea. It has sensors in the handle to record grip. Once a week, the kettle wirelessly transmits data to a medical professional. The prototype was designed by Callum Smith, a student at Northumbria University.

HOW CAN VIDEO CAMERA COUNT YOUR HEARTBEATS

A digital video camera that checks on heart rate and breathing patterns could be a life-saver for patients with chronic conditions such as heart failure (where the heart can’t pump blood properly around the body).

It enables the camera to monitor photoplethysmography — which is how the body absorbs light. This helps it detect ‘micro-blushes’ in the skin every time the heart beats.

Microblushes are changes in skin colour that occur when blood flow in the skin increases or decreases as the heart pumps blood round the body.

They are mainly found on the face, but are not visible to the human eye.

Regular reduction in the amount of blood going to the skin could indicate a heart problem. The camera can spot these changes even in the dark.

Sensors in the camera also monitor breathing by tracking tiny movements in the chest. In patients with lung disease, such as emphysema, changes in breathing can indicate they need an oxygen cylinder to use at home. Doctors already use the technology to monitor patients in high-security psychiatric units. Now there are plans to extend its use to patients with heart and lung problems in their own homes.

CALL 999 — WITH YOUR WALLPAPER

In future, you may not even need a phone to call an ambulance if you fall or injure yourself at home. Simply tell the wallpaper to do it.

Researchers at the Nanyang Technological University in Singapore are working on technology to put miniature electronics into wallpaper that would allow it to communicate with people. In future, you may not even need a phone to call an ambulance if you fall or injure yourself at home. Simply tell the wallpaper to do it. 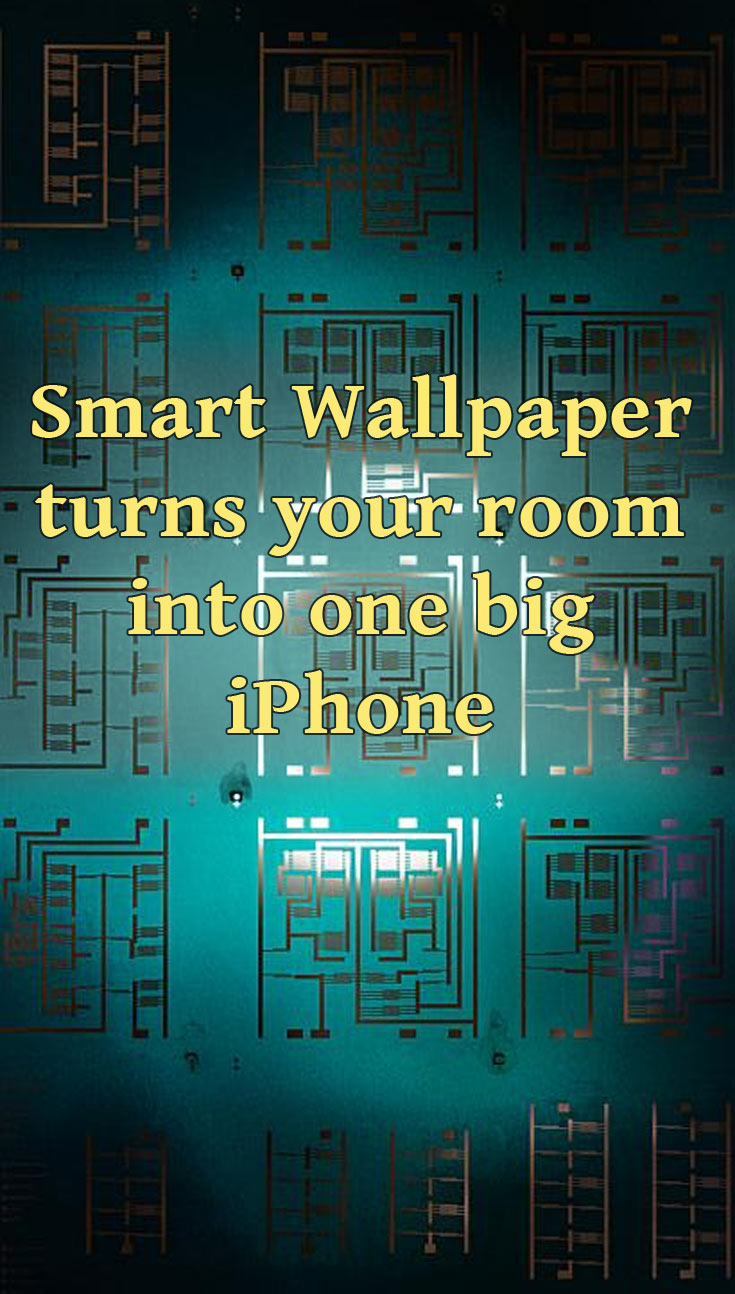 They have come up with a way of ‘printing’ the electronics needed, such as sensors, microphones and speakers, on such a minute scale that they can be incorporated into paper, clothing and textiles. 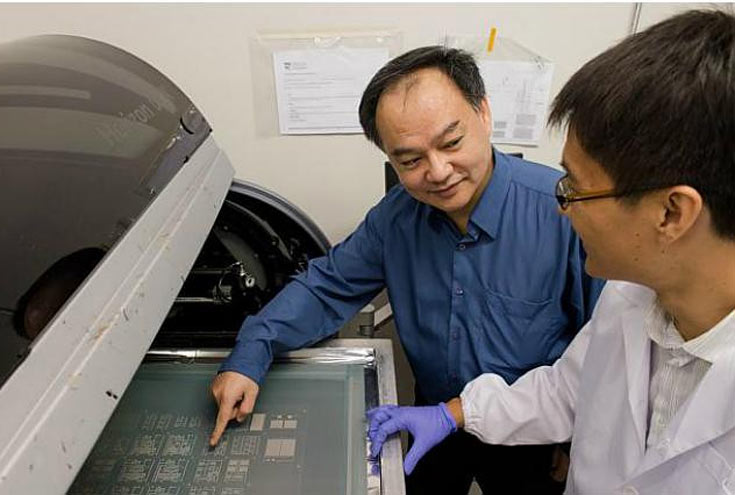 One of their first goals is to develop wallpaper that can monitor vital signs, such as heart rate and movement, and respond to verbal instructions — such as to dial 999. Tiny speakers built into the paper will allow a two-way conversation, which could mean sick or injured patients unable to reach a phone can still call for help.

Scientists are planning a start-up company in the next year or two to commercialise the high-tech wallpaper.

STICK CAN TELL IF YOU’RE MOBILE

Scientists have developed a walking stick that can tell if it’s not being used.

Wireless software built into the so-called Smart Cane can message carers automatically via email or phone, alerting them to the possibility that an elderly relative may have fallen or been taken ill. 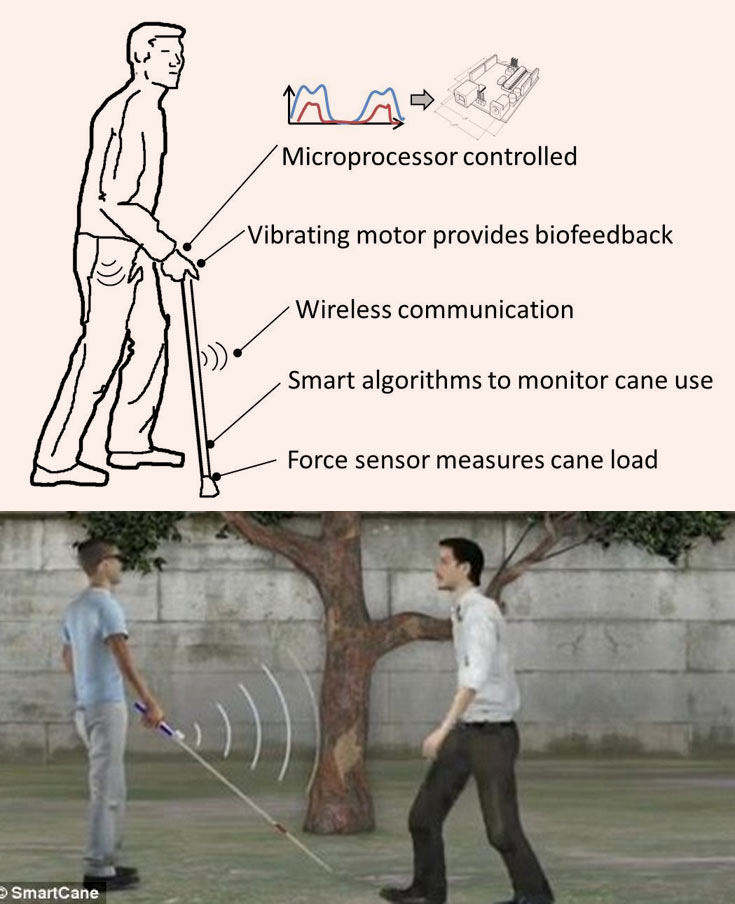 The recently unveiled prototype contains technology that lets it build a profile of a person’s normal daily movements. It measures walking speed, while a tiny gyroscope tracks if the stick is vertical or horizontal, which could indicate the user has fallen. The cane is programmed to raise the alarm when there is a sudden and severe change in movement habits, for example, if it has not been moved for an hour or two.

The Smart Cane is expected to become available this year.