There’s nothing more uplifting than an underdog story—especially when the underdog is furry, four-legged, and maybe also an actual dog. Take the rescue canines below, all of whom managed to paw their way into America’s hearts.

In 1989, Kevin di Cicco was visiting his grandfather’s cabin near Yosemite in northern California when he came upon a disheveled-looking Golden Retriever. Di Cicco took him in, named him Buddy, and started bonding with him by playing catch. He tossed tennis balls and baseballs to Buddy, who caught them in his mouth, and spent six months teaching Buddy how to use his snout to hit a basketball into the basket. 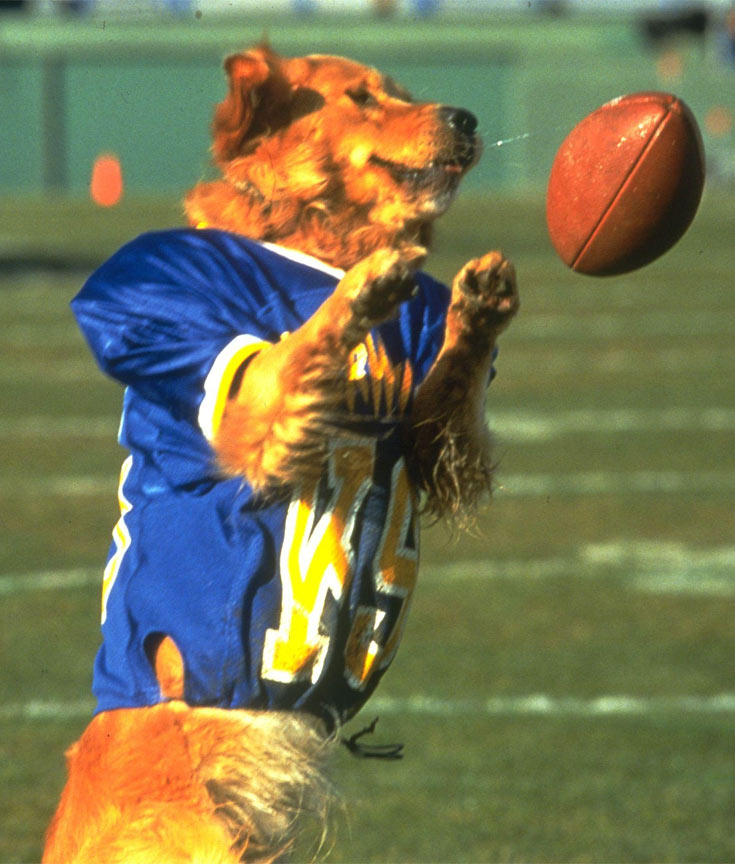 In the early ’90s, Buddy (with di Cicco) showed off his basketball, baseball, and soccer skills on two episodes of The Late Show with David Letterman. Buddy went on to play Comet on Full House, and starred in the 1997 film Air Bud. Because Buddy died of cancer the year after his big screen debut, other Golden Retrievers portrayed him (and his puppies) in the many Air Bud sequels and spin-offs. Over the years, di Cicco has trained some of Buddy’s biological puppies to play sports, continuing Buddy’s stellar athletic legacy.

On September 15, 1918, an American corporal named Lee Duncan came across a dog kennel inside the ruins of a German encampment near Lorraine, France. There, he found a German Shepherd mother with her litter of newborn puppies. Duncan rescued the dogs, keeping two of the puppies for himself. He named them Rin Tin Tin and Nanette, and brought them home to the U.S. after the war. Nanette fell ill during her trip to Duncan’s home in California and passed away, but Duncan continued to raise Rin Tin Tin, teaching him to do tricks and signing him up for dog shows. 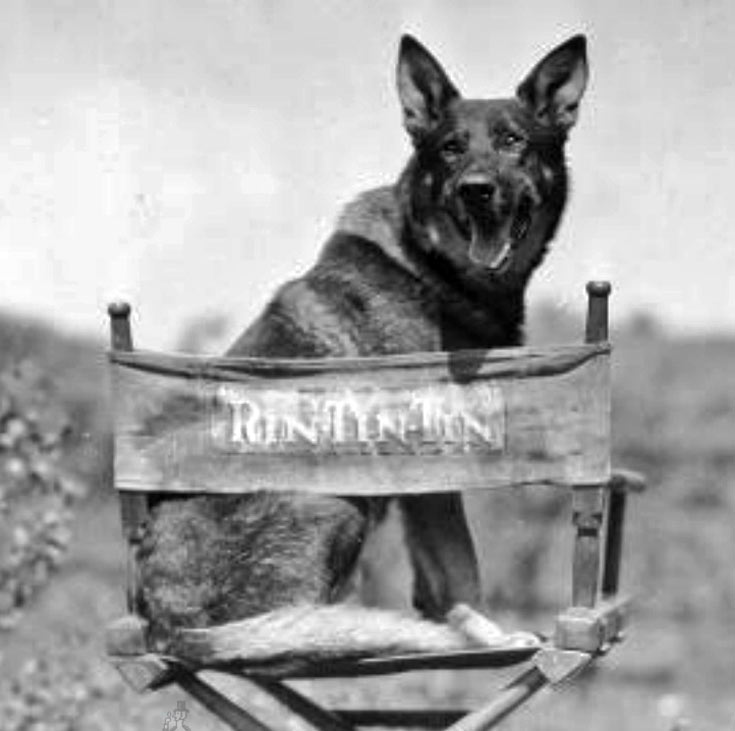 The expressive German Shepherd went on to appear in dozens of silent films in the 1920s and early ’30s, helping Warner Bros. earn huge profits (some even credit Rin Tin Tin with saving the then-struggling studio). In 1932, millions of fans mourned Rin Tin Tin’s death, news of which interrupted radio broadcasts across the country. His descendants have carried on his legacy, and today, you can see Rin Tin Tin’s star on the Hollywood Walk of Fame. 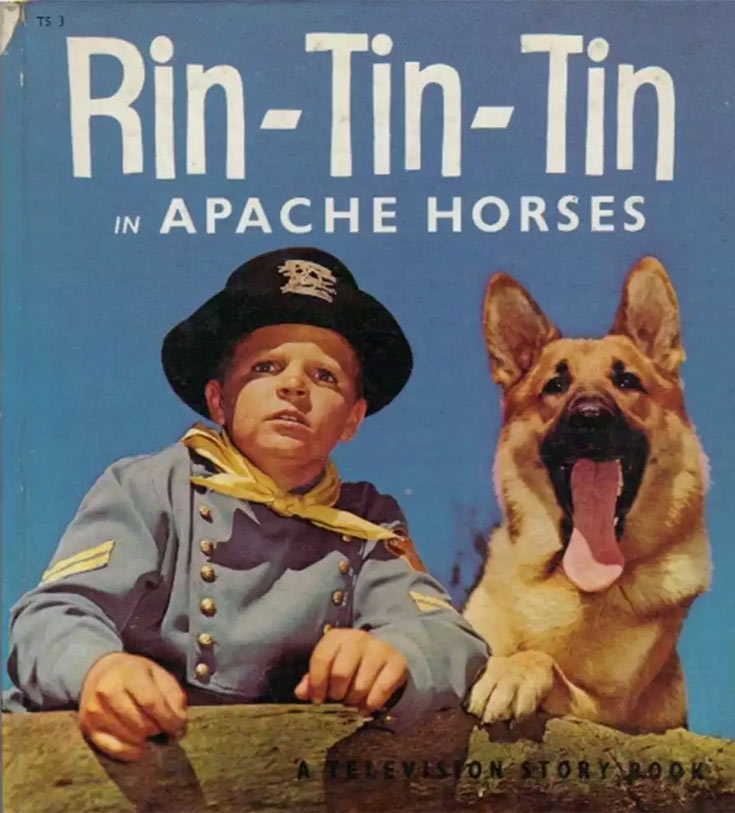 With a book, an app, and 2 million Instagram followers, Marnie the Dog has solidified her place in pop culture. But her path to Internet stardom wasn’t always so certain. In 2012, Animal Control in Connecticut came across a dirty, 10-year-old shih tzu living on the streets. After spending about four months in a shelter, she was adopted by a woman by the name of Shirley Braha, who named her Marnie and started posting photos of the unusual-looking pup online. According to Braha, Marnie’s head is likely tilted due to a bout with a prior illness called Vestibular Syndrome. (As for that permanently stuck-out tongue? Marnie was just born that way.) These days, Braha and Marnie (who is now 14) use Marnie’s fame to encourage people to adopt senior dogs. 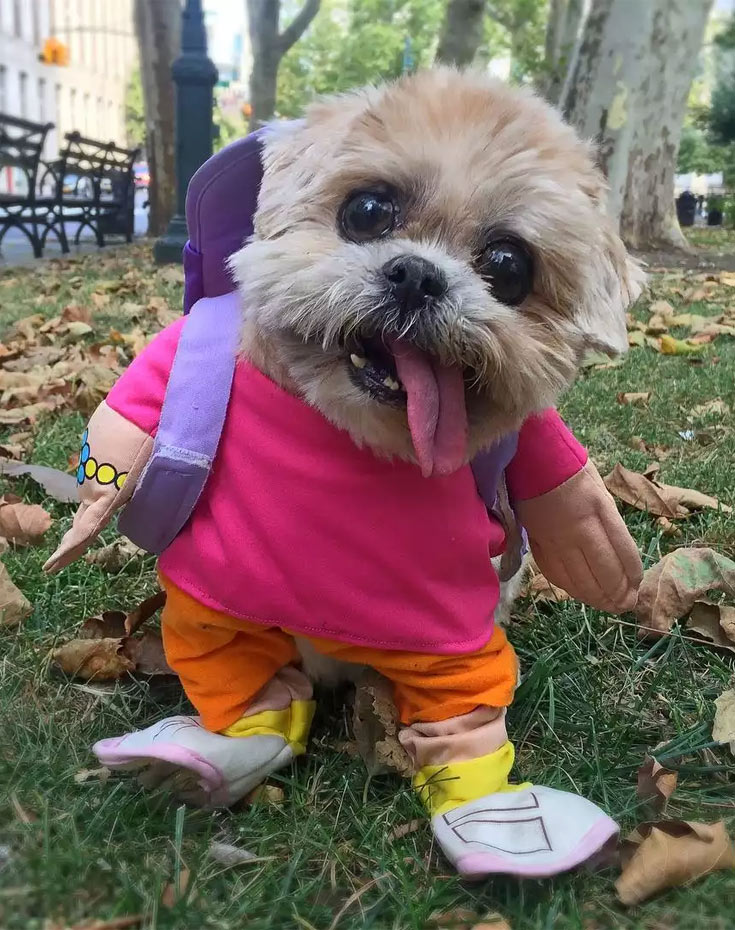 In 1917, John Robert Conroy was a 25-year-old soldier in the 102nd Infantry, 26th Yankee Division. During basic training in New Haven, Connecticut, he spent long, grueling days preparing to ship overseas for WWI. While training on a field at Yale University, Conroy befriended a stray bull terrier mutt who had taken to hanging around the soldiers. He affectionately called the puppy Stubby, after the dog’s short tail. When training ended, Conroy decided to bring Stubby with him to France by smuggling him on the ship. Although dogs were forbidden, Stubby allegedly gave a paw salute to the officer who found him, and Stubby was allowed to stay with Conroy and the rest of the 102nd Infantry. 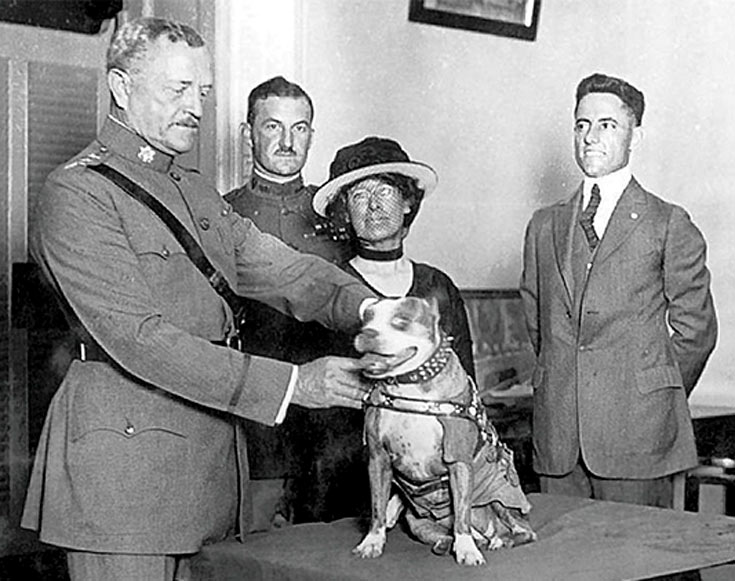 On the battlefield and in the trenches, Stubby did more than simply boost morale. He served on the front lines, leading soldiers to the wounded. Heroically, Stubby barked to alert his fellow soldiers of an unexpected mustard gas attack, thus saving his entire infantry, and even helped catch a German spy. After the war, Stubby received a hero’s welcome: He met with U.S. presidents, marched in American Legion parades, and received honors from the Red Cross, Humane Society, and YMCA. If you visit the Smithsonian, you can see Stubby with his coat of medals, thanks to the work of a taxidermist.

In late 2010, Courtney Dasher was shopping at a Los Angeles farmer’s market when she came across an adoptable four-month-old Chihuahua/Dachshund mix, who had been picked up by the rescue group after being abandoned by the side of a road. Dasher fostered the puppy for a week, decided to permanently adopt him, and named him Tuna. Tuna’s comical appearance—his prominent overbite, wrinkled neck, and recessed jaw—has earned him 1.8 million Instagram followers. Dasher uses Tuna’s fame to raise money and awareness for animal rescue organizations and inspire people to focus on inner beauty. 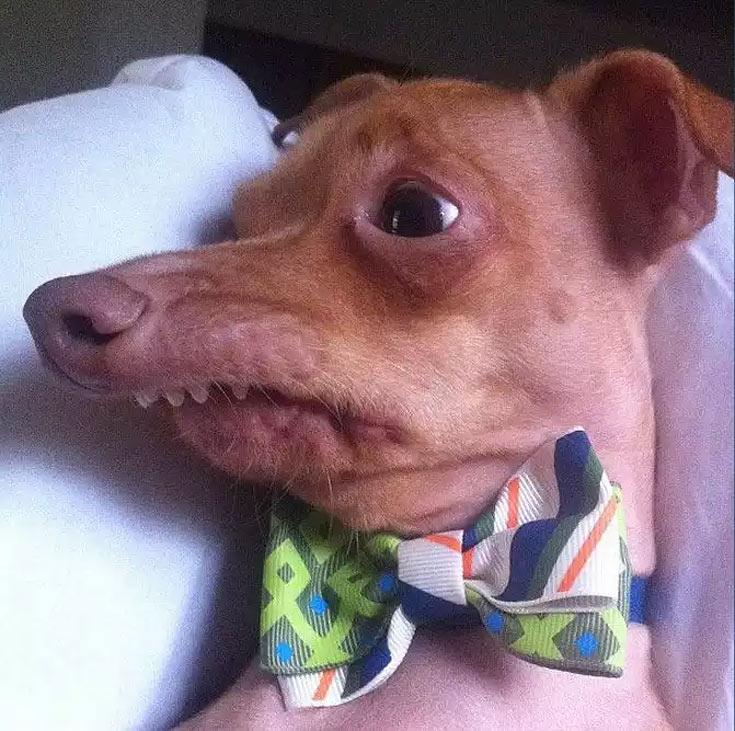 By 1960, animal trainer Frank Inn had coached hundreds of animal actors. After working for the legendary Weatherwax family for 14 years, helping to train some of the collies that played Lassie, Inn became his own boss, getting dogs, cats, pigs, snakes, and chimpanzees ready for their big- and small-screen close-ups. One day, in a Burbank, California, animal shelter, Inn came across a cute brown puppy. Doing what he did best, Inn taught the dog—who he named Higgins—a variety of tricks and landed him gigs on TV shows, including a part on Petticoat Junction. 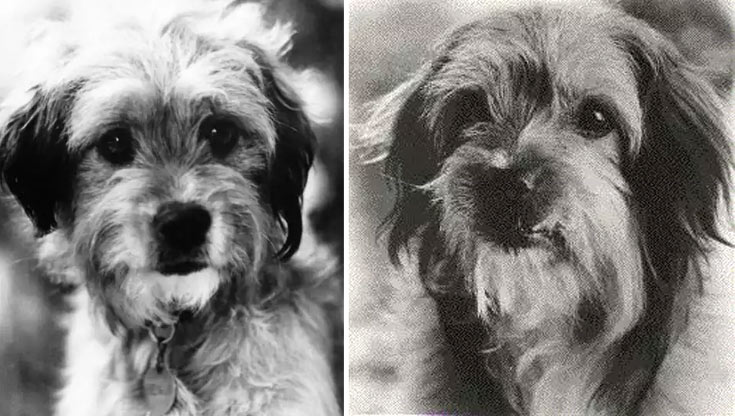 Higgins’s biggest role emerged towards the end of his life. He was tapped to star in Benji, a popular 1974 film about a stray dog who rescues two kidnapped children. Higgins passed away in 1978, but his offspring were tasked with portraying Benji in the movie’s sequels.

In the early 1990s, a woman stumbled upon a taped-up cardboard box left on a busy street in Los Angeles. Inside she found a gaunt, bald Chihuahua puppy, whose back had been broken and vocal cords cut. The dog lived at an animal hospital for a year, until Deborah Turner, a groomer and pet store owner, heard about Willy. She adopted him and outfitted him with a wheelchair so he could move around on his own. News of “Wheely Willy” spread, and he appeared on news shows, Animal Planet, and in two popular children’s books. He and Turner also visited hospitals and schools, spreading a message of hope to the ill and disabled. Wheely Willy passed away peacefully in Turner’s bed in 2009. 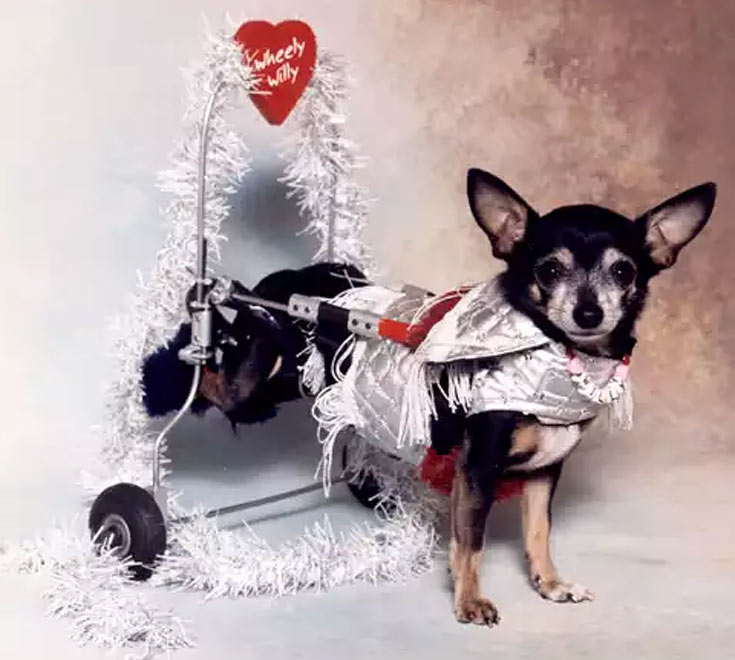 In 1995, Mary Flood, a Utah-based emergency worker, came across an abandoned black Labrador puppy lying on the street with a broken leg. She adopted the dog, named him Jake, and nursed him back to health. Eventually, Flood began training him to aid search and rescue during natural disasters, including avalanches and floods. After passing a rigorous examination, in which he was tested on his obedience and agility, as well as his ability to follow commands, bark, and find victims under piles of rubble, Jake became a different kind of rescue dog entirely—an elite U.S. government-certified rescue dog. 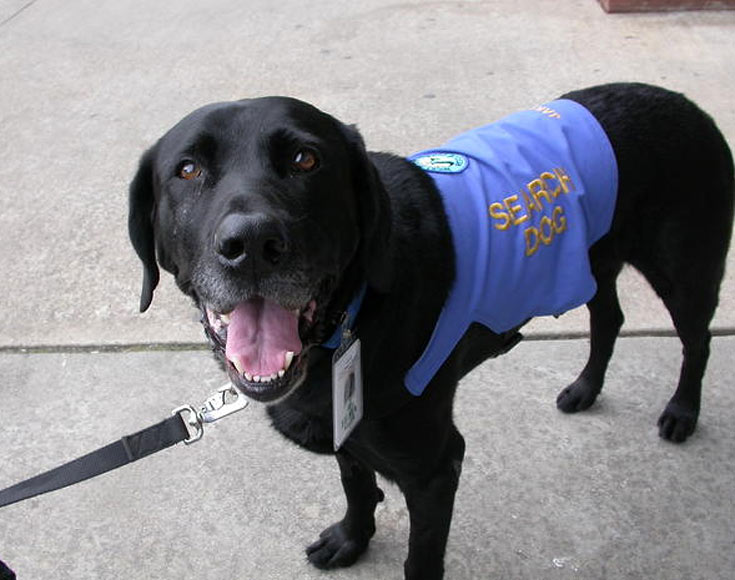 Under Flood’s handling, Jake got to work saving lives. Most notably, he aided search and rescue teams at the World Trade Center on September 11 and during Hurricane Katrina. During training sessions, he also served as a model to younger search and rescue dogs, showing them how to find a trapped victim and bark to get help. After Jake died of cancer in 2007, Flood recalled how he boosted morale: “He was always ready to work, eager to play—and a master at helping himself to any unattended food items.”