No member of catkind is more maligned than the black cat. At best, they’re bemoaned as lackluster photography subjects; at worst, they’re seen as harbingers of really bad luck. But there’s a lot to love about these furballs, as evidenced by the holidays in their honor—the ASPCA celebrates Black Cat Appreciation Day annually on August 17 and, across the pond, October 27 is National Black Cat Day—and the facts below.

1. IN SOME CULTURES, BLACK CATS ARE GOOD LUCK

They may have a less-than-stellar reputation in some areas of the world, but there are plenty of places where black cats aren’t bad luck at all. If you’re a single lady in Japan, owning a black cat is said to increase your number of suitors; if you’re in Germany and one crosses your path from right to left, good things are on the horizon. 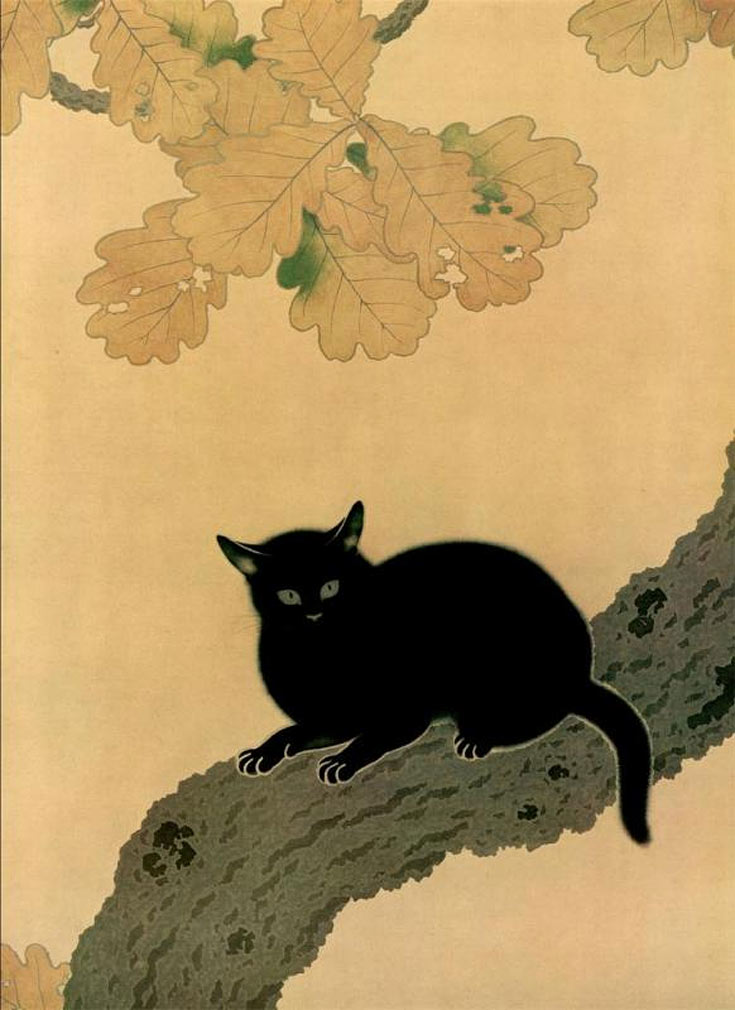 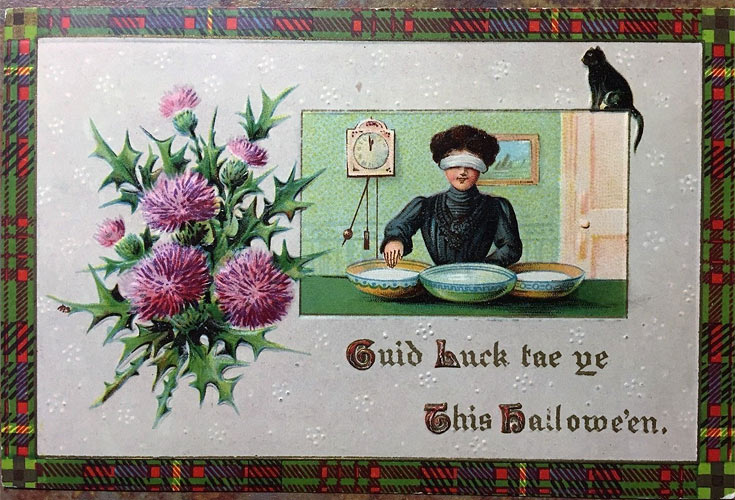 Not only were cats welcome aboard British vessels to hunt mice, but sailors generally thought a black cat in particular would bring good luck and ensure a safe return home. 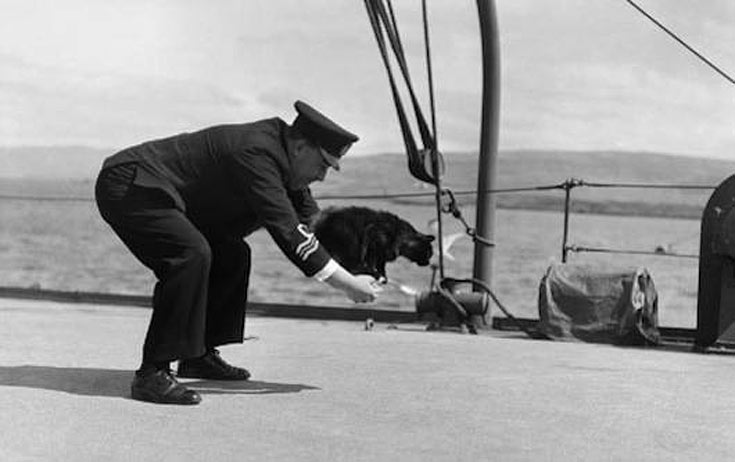 A few of these kitties have been enshrined in maritime history, like Tiddles, who traveled more than 30,000 miles during his time with the Royal Navy. (His favorite pastime was playing with the capstan’s bell-rope.) 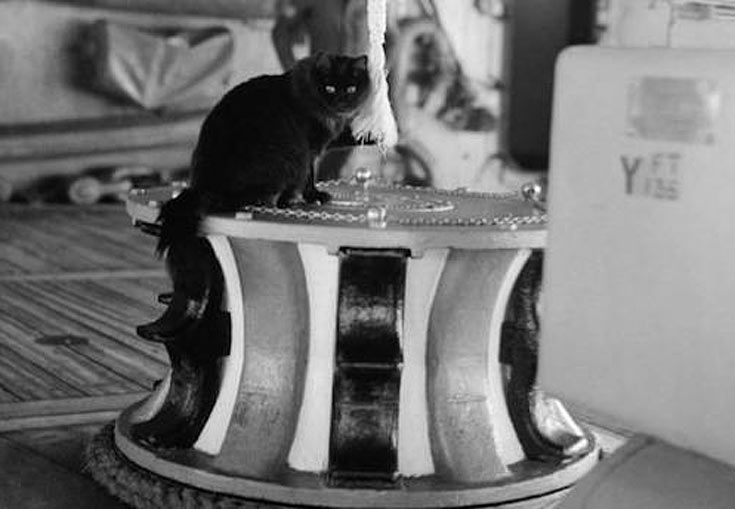 3. THERE IS NO ONE BLACK CAT BREED

The Cat Fanciers’ Association (CFA) recognizes 22 different breeds that can have solid black coats—including the Norwegian Forest Cat, Japanese Bobtail, and Scottish Fold—but the Bombay breed is what most people picture: a copper-eyed, all-black shorthair. The resemblance to a “black panther” (more on those animals in a bit) is no coincidence. In the 1950s, a woman named Nikki Horner was so enamored with how panthers looked that she bred what we now refer to as the Bombay. 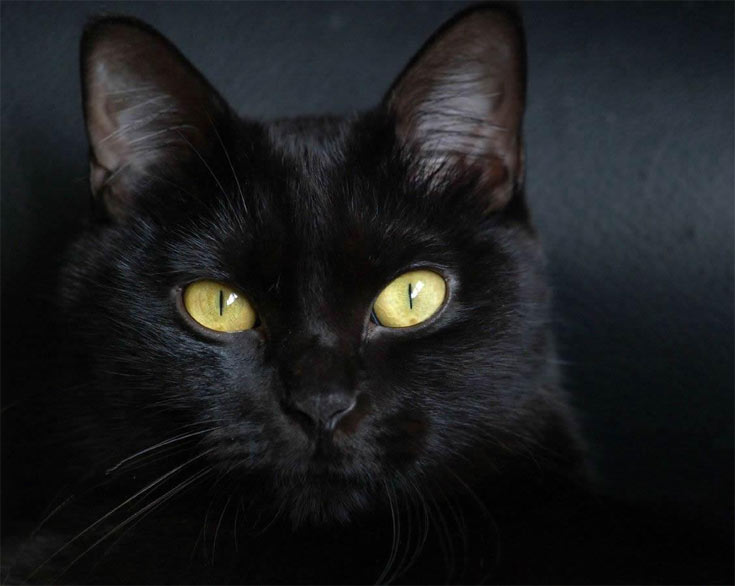 4. BLACK CATS ARE AS EASILY ADOPTED AS CATS OF OTHER COLORS

It’s common to think that black cats in shelters are the last in line to find their forever homes, but a recent survey from the ASPCA suggests otherwise. 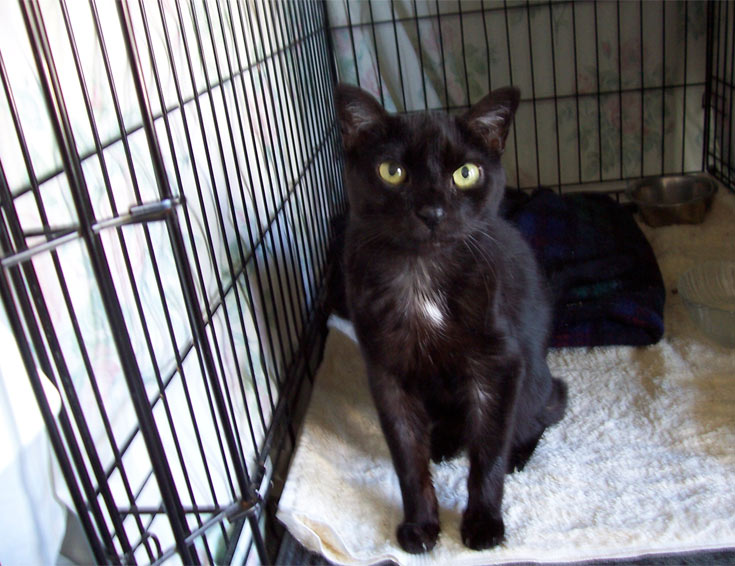 Although euthanasia numbers for black cats were some of the highest, their total number of adoptions was the highest of any hue as well. The vet who conducted the study argues that there may just simply be more black cats than other colors. 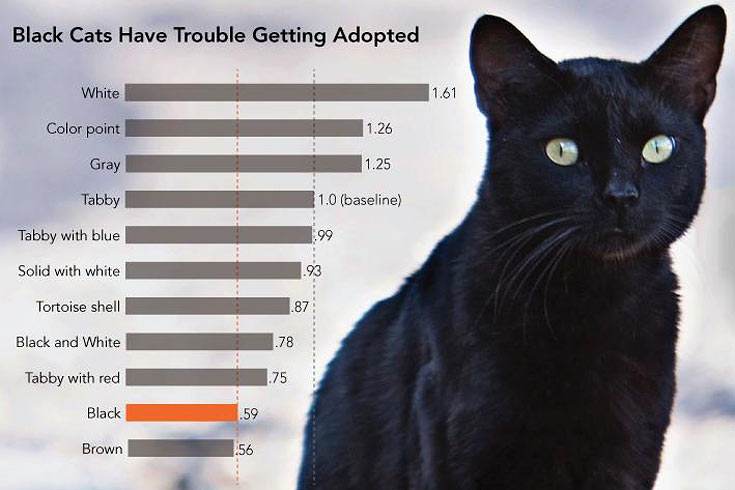 A black cat’s color all boils down to a genetic quirk. There are three variants of the black fur gene (solid black, brown, and cinnamon), and the hue works in conjunction with the pattern. 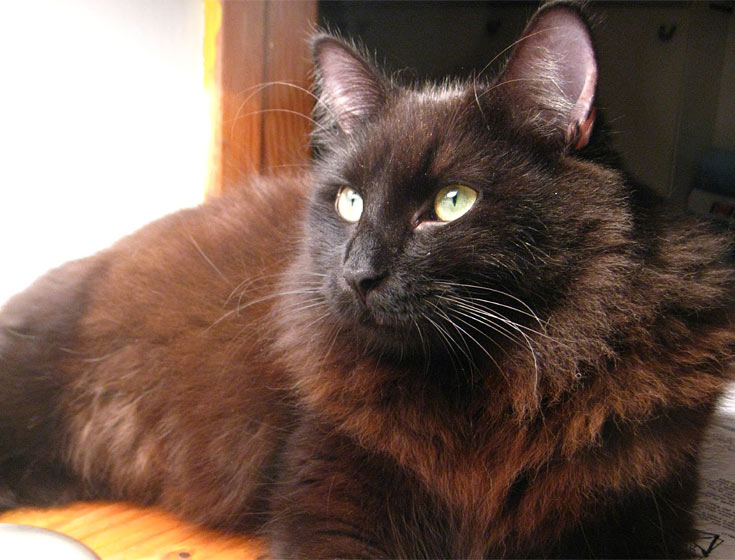 If a cat has a solid black hue, but also the dominant tabby stripe gene, heavy exposure to the sun can make the eumelanin pigment in its fur break down to reveal its once-invisible stripes (another potential cause: nutritional deficiency). What was once a black cat is now a rusty brown cat. 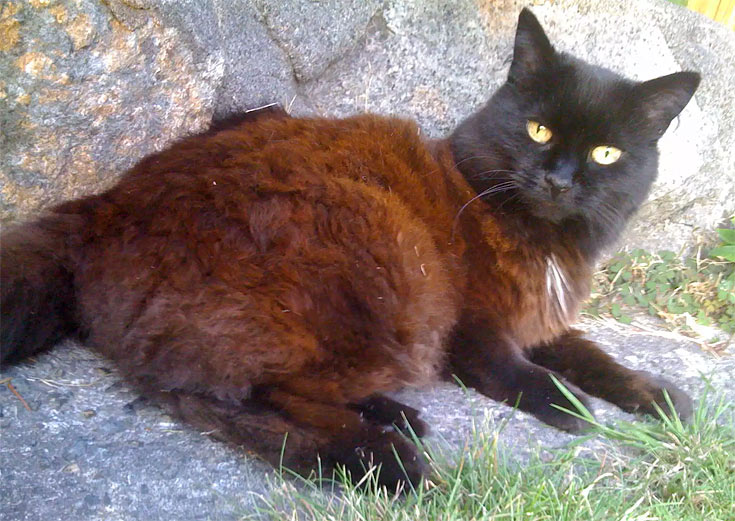 6. THE GENE THAT CAUSES BLACK FUR MIGHT MAKE THESE FELINES RESISTANT TO DISEASE

Even though their coloring is what gives them a bad reputation, these felines may be getting the last laugh after all. The mutation that causes a cat’s fur to be black is in the same genetic family as genes known to give humans resistance to diseases like HIV. 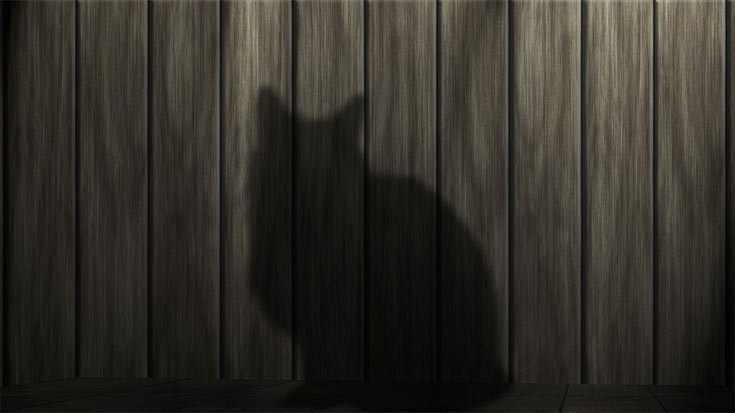 Some scientists think the color of these cats may have less to do with camouflage and more to do with disease resistance. They’re hoping that as more cat genomes are mapped, we may get a step closer to curing HIV.

7. YOU CAN VISIT A CAT CAFE DEVOTED TO BLACK CATS

Step through the doors of Nekobiyaka in Himeji, Japan and get ready for your wildest cat lady dreams to come true. 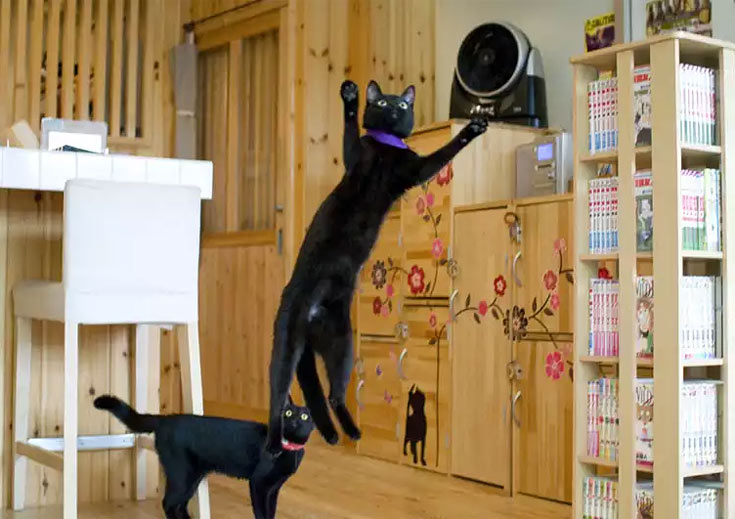 Black cats are the stars of this café and visitors are invited to pet (but not pick up) these lithe felines. Each of Nekobiyaka’s identical-looking black cats wears a different colored bandana to resolve any catastrophic mix-ups. 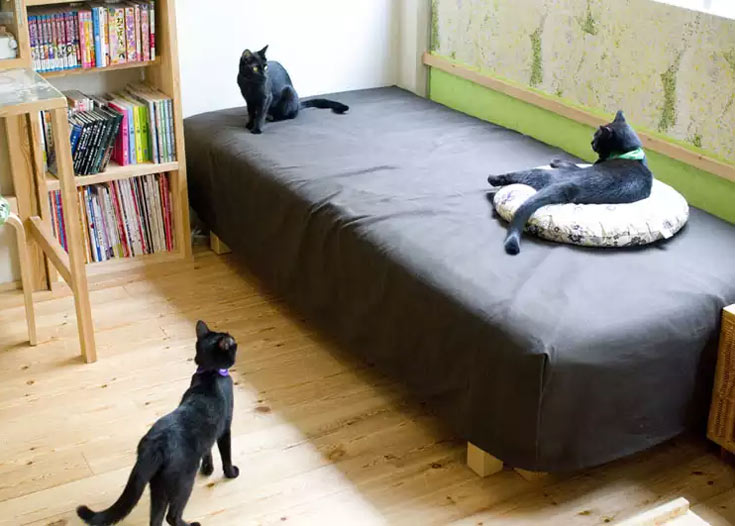 8. THEY’RE DIFFICULT TO PHOTOGRAPH—BUT IT CAN BE DONE

The modern-day conundrum black cat owners face isn’t bad luck, but bad lighting. In a world filled with people sharing photos of their pets on Instagram, black cats can end up looking like a dark blob in photos. One photographer’s advice? Minimalist backgrounds, so your subject can stand out, and angling them towards natural light sources (but keep them out of bright sunlight!). If you’re snapping pics on your iPhone, tap on your cat’s face, then use the sun icon to brighten up the photo. 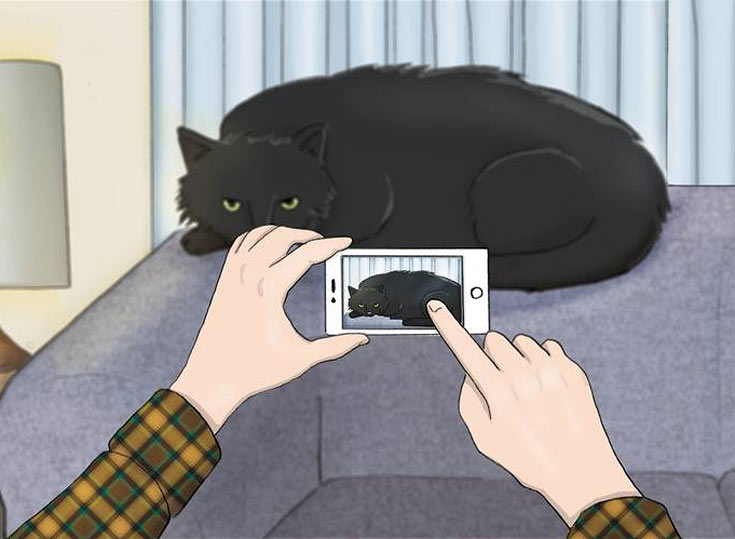 Technically, there is no such thing as a black panther—it’s a term used for any big black cat. What we call black panthers are in fact jaguars or leopards and yes, they have spots, too. Their hair shafts produce too much melanin thanks to a mutation in their agouti genes, which are responsible for distributing pigment in an animal’s fur. Look carefully and you can see a panther’s spots as the sunlight hits them in just the right way.