There’s no rule that regulates how animals obtain the necessary genetic material to reproduce.

Banana slugs are huge, they eat your garden, and they leave a slimy trail as they squirm across the ground. Their method of reproduction is no more pleasant than their appearance: The scientific name for one species of banana slug is Ariolimax dolichophallus, the second part of which means “long penis,” and it’s apt. 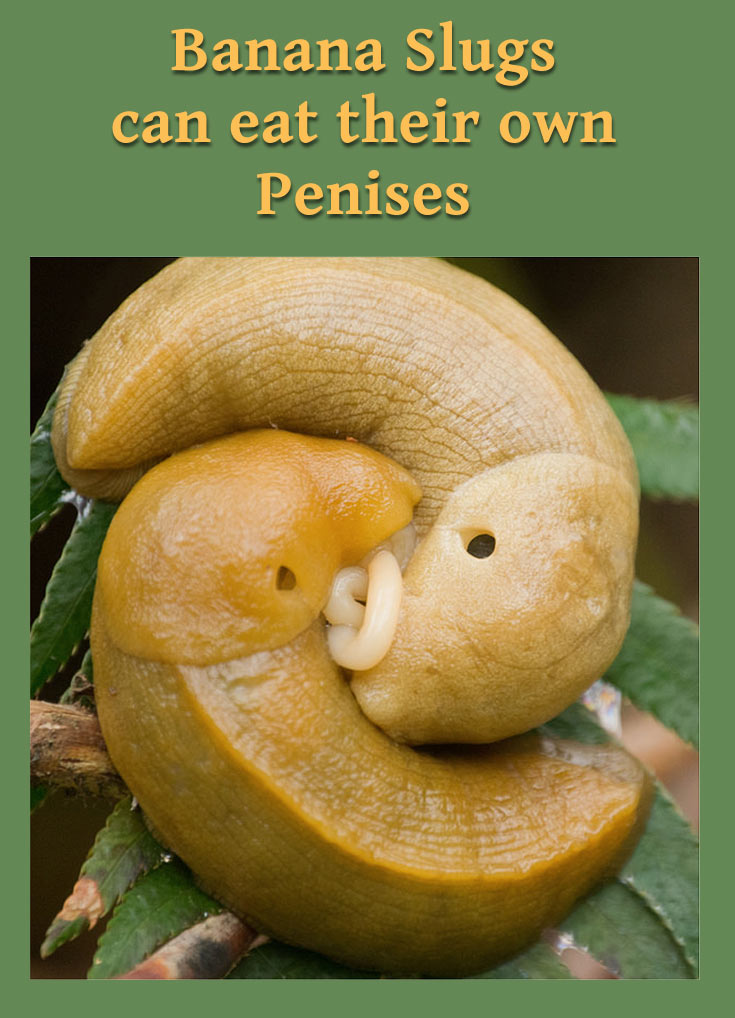 The invertebrates’ penises can be 6 to 8 inches long—the entire length of the slug’s body. When it’s time to get down, the penises grow out of pores in the head. It isn’t unusual for the penis of one slug to get stuck inside the other during copulation; to solve this uncomfortable situation, the slug on the receiving end will eat the penis that’s stuck inside it.

Sorry, people: The size and shape of a male animal’s sperm is more related to the biology and mating practices of the female—which is why mouse sperm is longer than the sperm of the biggest land animal on Earth, the elephant. 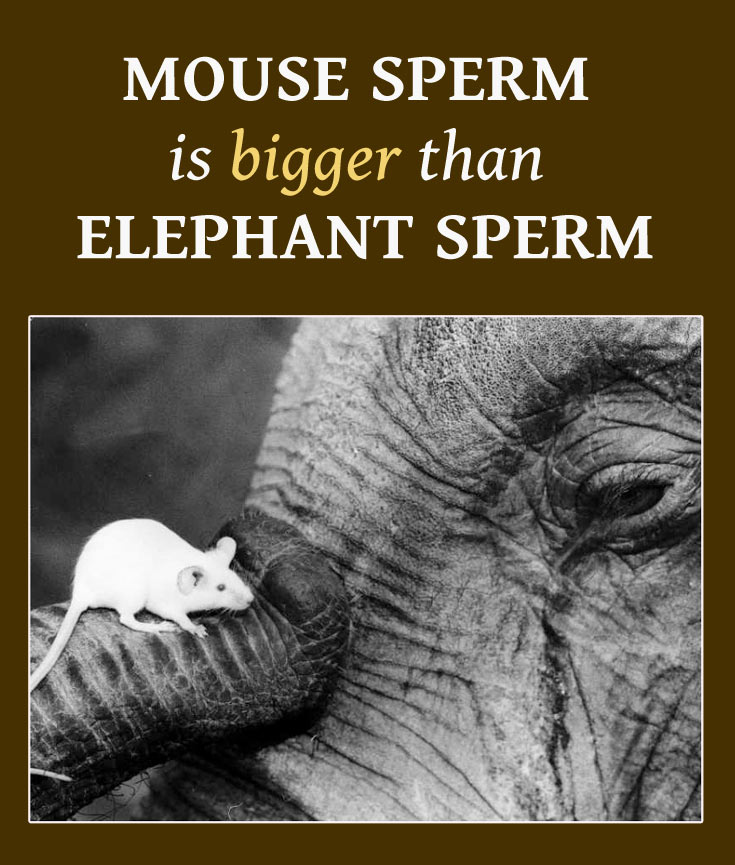 Two major factors in sperm size include the literal length and size of the female reproductive tract and how many mating partners the females have. Mice produce big sperm because, in most species, females have a lot of partners. The grouping of sperm can help to increase its competitiveness in promiscuous animals. Accordingly, the deer mouse has sperm equipped with small hooks that helps them clump together in groups of up to 35 sperm to fight their way to the
egg. Grouping sperm allows the cluster to swim in a straighter line to the egg; the ideal number is seven. Too many spermatozoa will eventually start working against each other. Meanwhile, female elephants have a very long reproductive tract (more on that below), so male elephants have evolved to produce more but smaller sperm to combat the risk of dilution. To follow the reproductive strategy of mice sperm, elephant sperm would need to be scaled up enormously to make a difference. 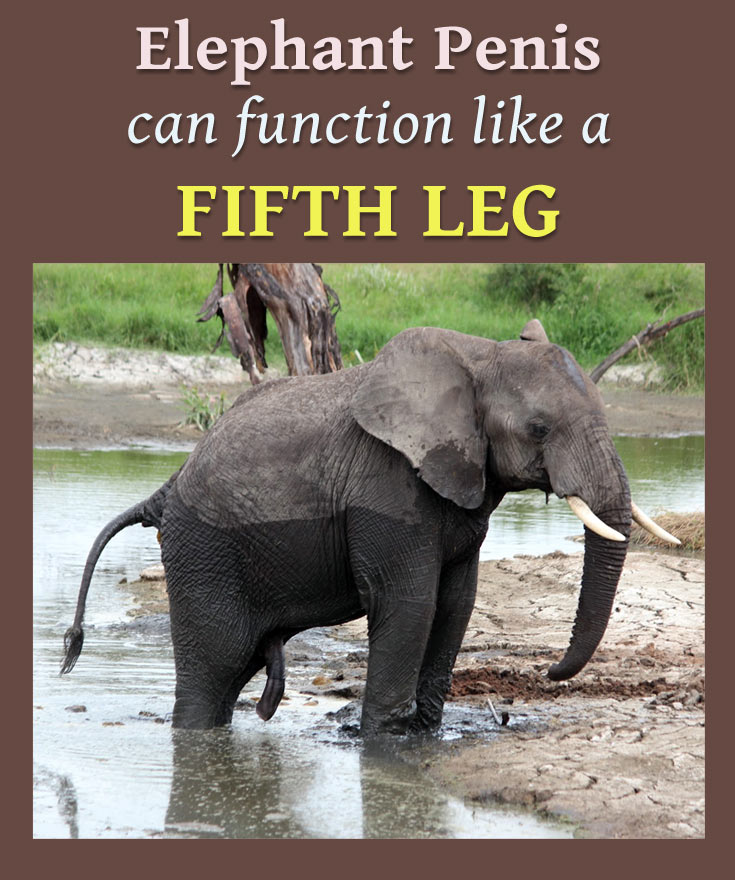 Speaking of elephants: The elephant penis is so huge that males can rest on it like it’s a leg. When erect, it can weigh in at 66 pounds and can be more than 3 feet long. It’s also prehensile, which means that an elephant can move it around and even use it to scratch hard to reach places. As we mentioned, female elephants have long reproductive tracts—nearly 10 feet from start to finish—and the vagina doesn’t begin until about 4.27 feet in, so the elephant penis doesn’t enter the vagina.

Male honey bee drones are infamous for extreme breeding. These bees have an internal penis—a.k.a. an endophallus—which, during copulation, is turned inside out and inserted into the queen. As he ejaculates, the drone falls back, breaking off his genitalia inside the queen and dying in the process. In theory, this sacrifice would lock his sperm inside and block out any competitors’, ensuring that his genes were passed on. But unfortunately that’s not what happens. As Social Insects: An Evolutionary Approach to Castes and Reproduction explains, “The next [drone] to copulate removes the mating sign [the endophallus plug] of his predecessor with the hairy ventral part of his own endophallus before he is able to insert its bulb and ejaculate the semen.” The next drone will do the same, and on and on. Of the 90 million sperm that end up in the queen’s oviducts, only 7 million make it to a pouch called the spermatheca. She uses that sperm over the course of her life to fertilize eggs.

That is just the start of the story when it comes to bee sex. In species where multiple males mate with the queen, the sperm wage war with each other inside of her. (This happens in some species of ants, too.) When males get a little too violent, queens from some species will give off chemicals to calm everyone down.

5. ONE AUSTRALIAN MARSUPIAL HAS SEX UNTIL IT DIES

The Antechinus is a mouse-like marsupial that eats insects, nests in trees, and has so much sex that it literally dies. By the time they hit 11 months old, males of this species have produced all the sperm they’ll create in their short lifetimes; for the next couple of weeks, they’ll go at it for up to 14 hours at a time with one female before moving on to another, over and over again, until their bodies break down. The male’s fur will fall out; he’ll bleed internally; he’ll get gangrene and any number of other infections, ultimately dying before he reaches one year. But he’s chasing tail up until the end: As Diana Fisher from the University of Queensland told National Geographic, “By the end of the mating season, physically disintegrating males may run around frantically searching for last mating opportunities. By that time, females are, not surprisingly, avoiding them.” The ladies are a little luckier, at least if they’re of larger Antechinus species: Between 30 and 50 percent of them will live to produce two litters.

The wrinkly, nearly blind naked mole rat is a successful breeder despite how inept its sperm is at being sperm. Small, malformed—many have multiple heads or are shaped oddly—and deficient in the mitochondria that most mammal sperm rely on for energy, just 15 percent, max, of the naked mole rat’s sperm can swim; only 1 percent can move quickly. The animals don’t produce that much sperm, either. These weird quirks may be due to the fact that the queen mates with only one male, so speedy, normal sperm isn’t necessary to guarantee the continuation of the species.

Neotrogla, a fly-like insect that lives in a cave in Brazil, is the first-ever species found that has “opposite” genitalia. The females are equipped with spiny, penis-like genitalia called gynosomes, which they use to penetrate the male; then, the insects get it on for up to 70 hours as the male transfers sperm and nutrients to the female. If the two are separated during copulation, the male’s insides will be ripped out while the female remains intact. 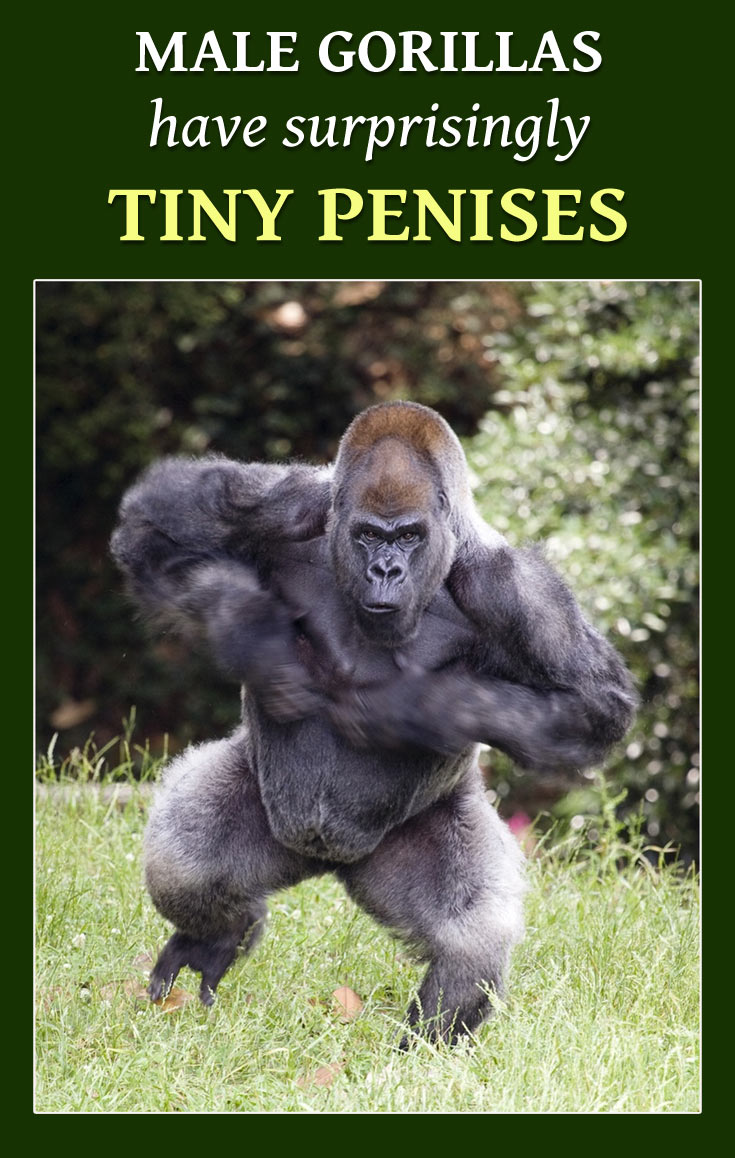 You’d never know it by looking at them, but male gorillas have surprisingly tiny penises: They measure just 1.5 inches in length when erect. How can an animal that weighs up to 485 pounds be so humbly endowed? It’s because primate mating practices are a huge factor in the evolution of the males’ genitalia. When males have to compete among other males—as the sexually promiscuous bonobos do—the species’ penis size is bigger. In gorilla society, male silverbacks mate with many females who are all monogamous to him. No reproductive competition equals a tiny penis.