Whether or not they deserve their notorious reputation, sharks are a common source of fear. But beachgoers shouldn’t worry about coming face-to-face with these spooky specimens—they all dwell at least 1000 feet below the ocean’s surface. From ghost sharks to goblin sharks, we’re here to shed light on the mysterious lives of these deep sea creatures. 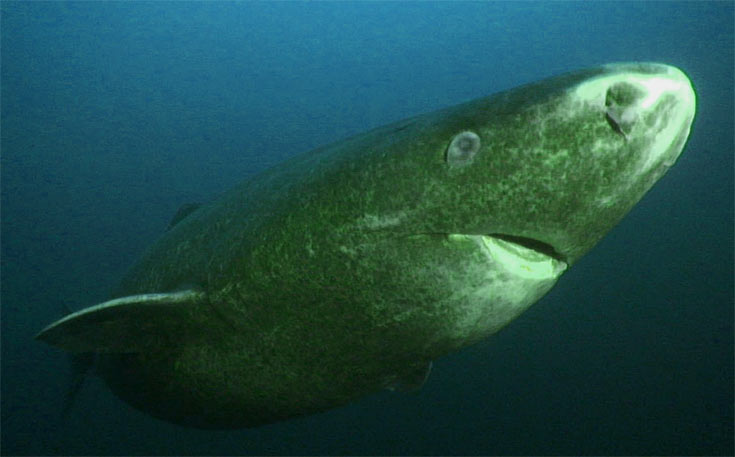 The first part of the Greenland shark’s scientific name, Somniosus microcephalus, means “sleep,” a nod to its sluggish lifestyle. The second largest predatory shark in the ocean moves at a glacial pace of one mile per hour. The drowsy name also makes sense in the context of the effect the shark has on those who eat it. Its flesh contains the toxic substance trimethylamine oxide, and ingesting it can cause vomiting, diarrhea, convulsions, and the appearance of drunkenness (that’s why native Greenlanders call someone who’s had too much to drink “shark-sick”). The sharks are also capable of having abnormally long lives. In 2016, researchers found a specimen that had been cruising deep beneath the Arctic for the past 392 years. 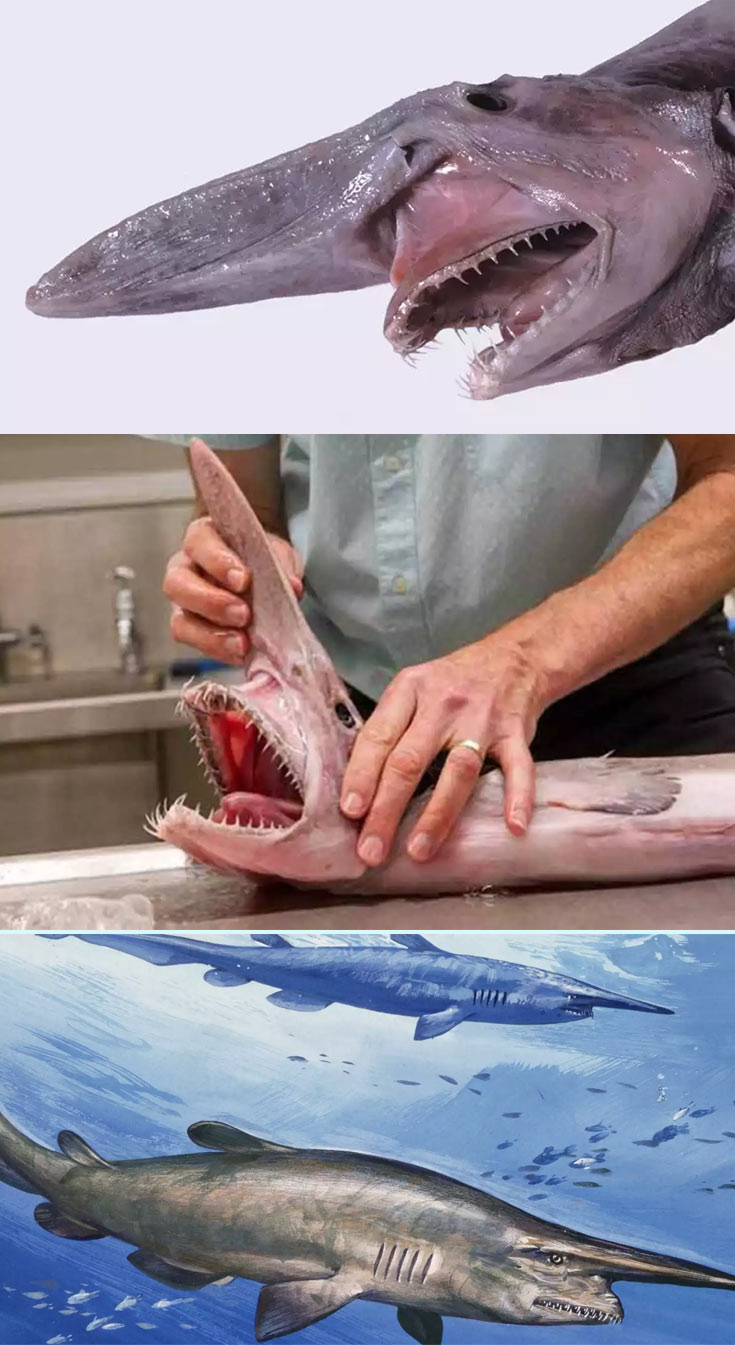 The goblin shark isn’t known for its dazzling good looks. Its defining feature is a jagged mouth of teeth that becomes even more pronounced when it launches forward from the skull to seize prey. Fortunately for anyone disturbed by its appearance, the goblin shark occupies depths up to 4265 feet where looks aren’t a priority.

A much bigger item on the species’s evolutionary agenda is finding sustenance. Food is hard to come by that far below the surface, so the species adapted by developing a relatively large mouth for trapping squid, fish, and crustaceans that pass by. They’ve long been known to Japanese fishermen (who originally named it tengu-zame after a long-nosed goblin from folktales), but much about these sharks still remains mysterious to scientists. 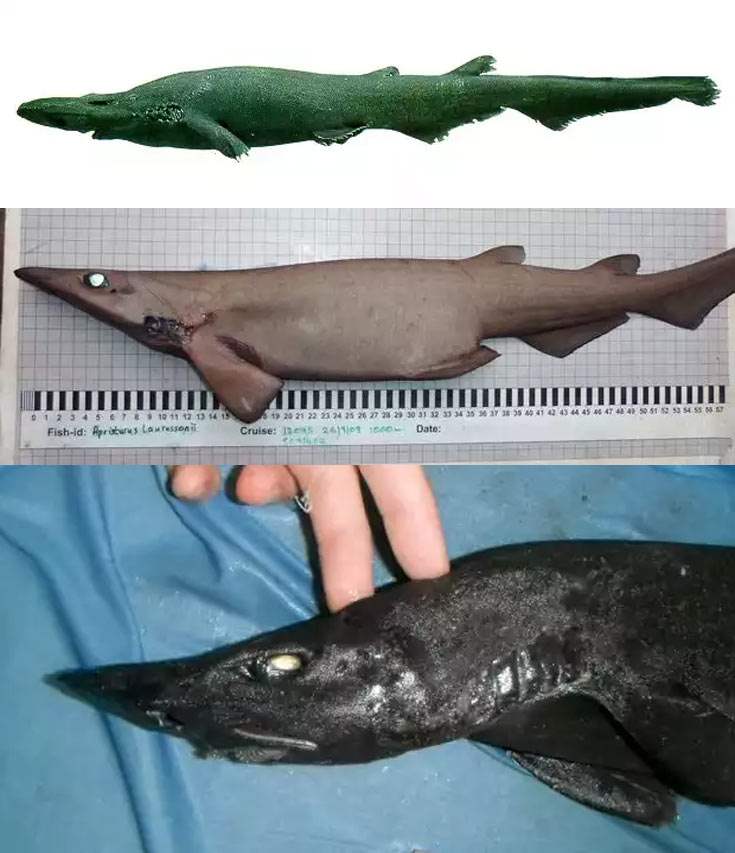 There are at least 32 species of demon catshark including the white ghost catshark, the smalleye catshark, and the Iceland catshark (above), but scientists still know little about their lives at the bottom of the Northeast Atlantic. The slow-moving creatures grow up to 2 feet long and feed on squid and crustaceans as far as 7000 feet beneath the sea. Their flat heads and gleaming, slanted eyes earned them their demonic name. Another distinctive feature of the Apristurus genus are the two spineless dorsal fins poking up from the back of the body.

Not much light reaches the water 1640 feet beneath the ocean’s surface, but swell sharks have developed a unique way to catch each other’s eyes. Their skin absorbs what little blue light there is at the bottom of the sea and transforms it into brilliant green biofluorescent light. Swell sharks have a photoreceptor in their eyes that lets them detect the glow, whereas humans cannot.

A couple of years ago, a team of researchers found their way around this by building a camera with a blue light-blocking yellow filter. This allowed them to explore underwater environments with “shark vision.” Scientists aren’t entirely sure what function the biofluorescence serves, but they suspect it’s used as a form of communication between sharks. Swell sharks have a different super power for dealing with enemies: When threatened, they suck in large gulps of water, swelling up to twice their size (hence the name).

This shark got its cutesy name from a rather gruesome behavior: When feeding, the 16- to 22-inch predators latch onto prey with suction cup lips and rotate to carve out medallions of meat. The wounds they leave behind are more scoop-like than cookie-shaped, and are inflicted on larger animals like marlin, tuna, wahoo, dolphins, and whales. They can be found 3200 feet deep during the day, but they wander upward at night to hunt, which has led to at least one attack on a human swimmer. Though a run-in with a cookie cutter likely wouldn’t be deadly, their creepy, tooth-filled “smile” isn’t something you’d want to see on a midnight swim. 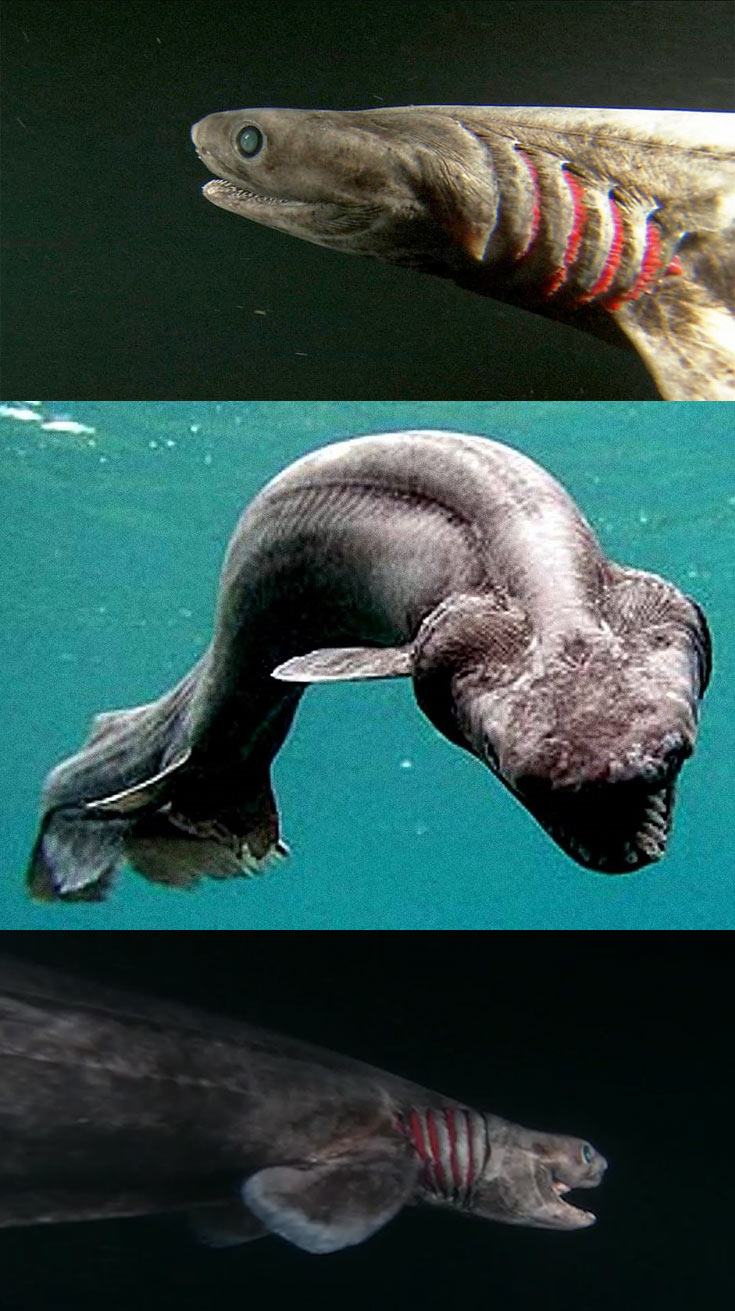 Frilled sharks have been around for 80 million years, a fact that’s easier to process once you take a look at them. At the end of their prehistoric bodies is a mouth full of 300 teeth across 25 rows that glisten white to lure in prey.

The shark is named for its six pairs of gills which are each trimmed with red “frills.” In 2007, a group of fishermen made history when they spotted a live frilled shark in shallow waters off the coast of Japan. The fish was taken to the Awashima Marine Park in Shizuoka where it was transferred to a seawater pool. After some incredibly rare photographs were taken, the shark sadly died a few hour later. 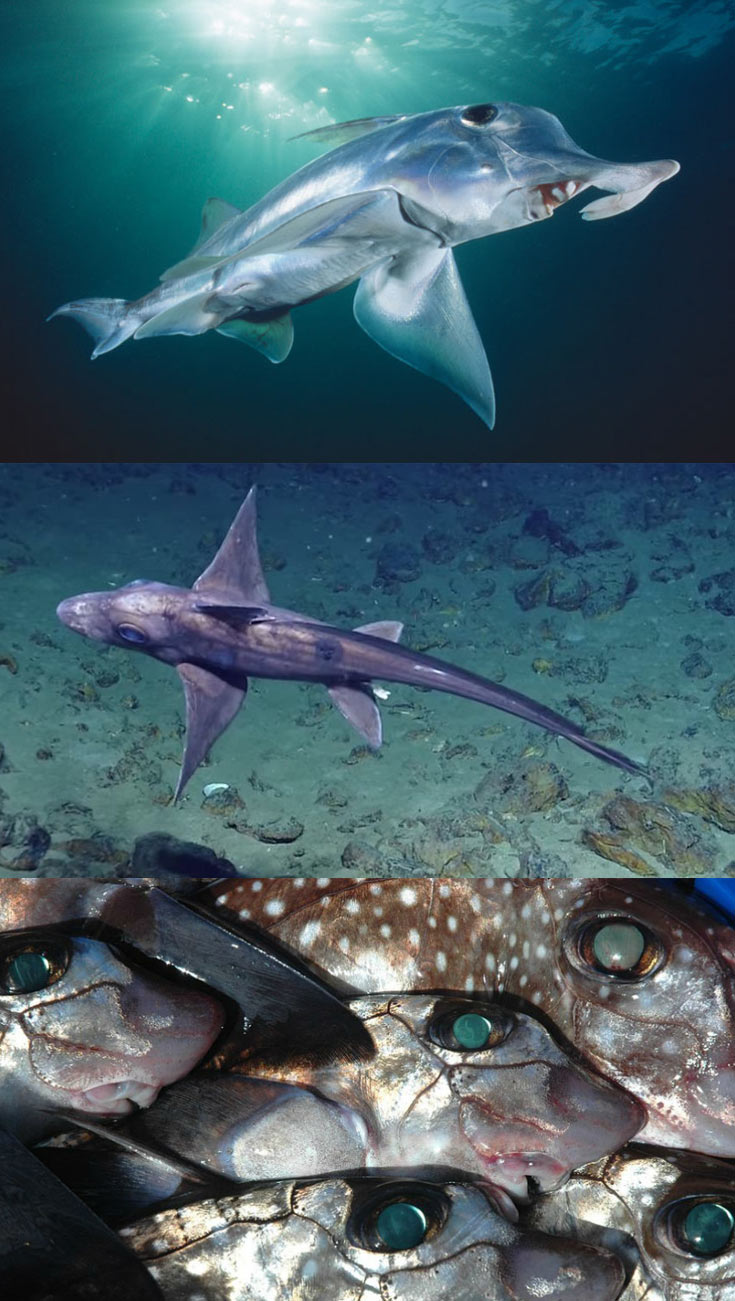 In 2009, scientists with the Monterey Bay Aquarium Research Institute recorded video of a strange creature 6700 feet deep into the Gulf of California. It had a long nose, ghoulish gray skin, and saucer-like eyes that stared blankly into the surrounding abyss. Seven years later, a team of experts identified the creature to be a pointy-nosed blue chimaera, a species of ghost shark never before caught live on tape.

Despite its name, the ghost shark isn’t technically a shark. Chimaeras are close relatives that also use flexible cartilage in place of solid bone. Little is known about the group, but researchers suspect the lines of dots dimpling their snouts are used to detect prey. Males are also notable for wielding retractable sex organs on their foreheads.