At the turn of the last century, there were only a handful of fitness enthusiasts America turned to for wellness tips that didn’t involve enemas or strange contraptions. One of them was Eugen Sandow (1867-1925), a German-born bodybuilder who appeared to be carved from marble. Sandow’s physique was so impressive that he regularly toured to perform feats of strength; other times, he simply stood on stage like a statue while a gawking audience counted his abs.

But Sandow wasn’t content merely to be admired: He wrote books, started his own magazine (Physical Culture), wrestled a muzzled lion for the sport of it, and regularly opined on how his pear-shaped fans could work toward better physiques. While not all the advice was salient, Sandow did have a grasp of fitness principles that magazines and coaches have gone on to repeat for decades. Here’s what the pioneering bodybuilder had to say to those seeking the body of a Greek god.

1. YOU CAN EXERCISE WHILE SITTING DOWN.

In his 1897 book, Strength and How to Obtain It, Sandow advised readers that sitting down and straining one’s muscles was virtually as good as hitting the weights. 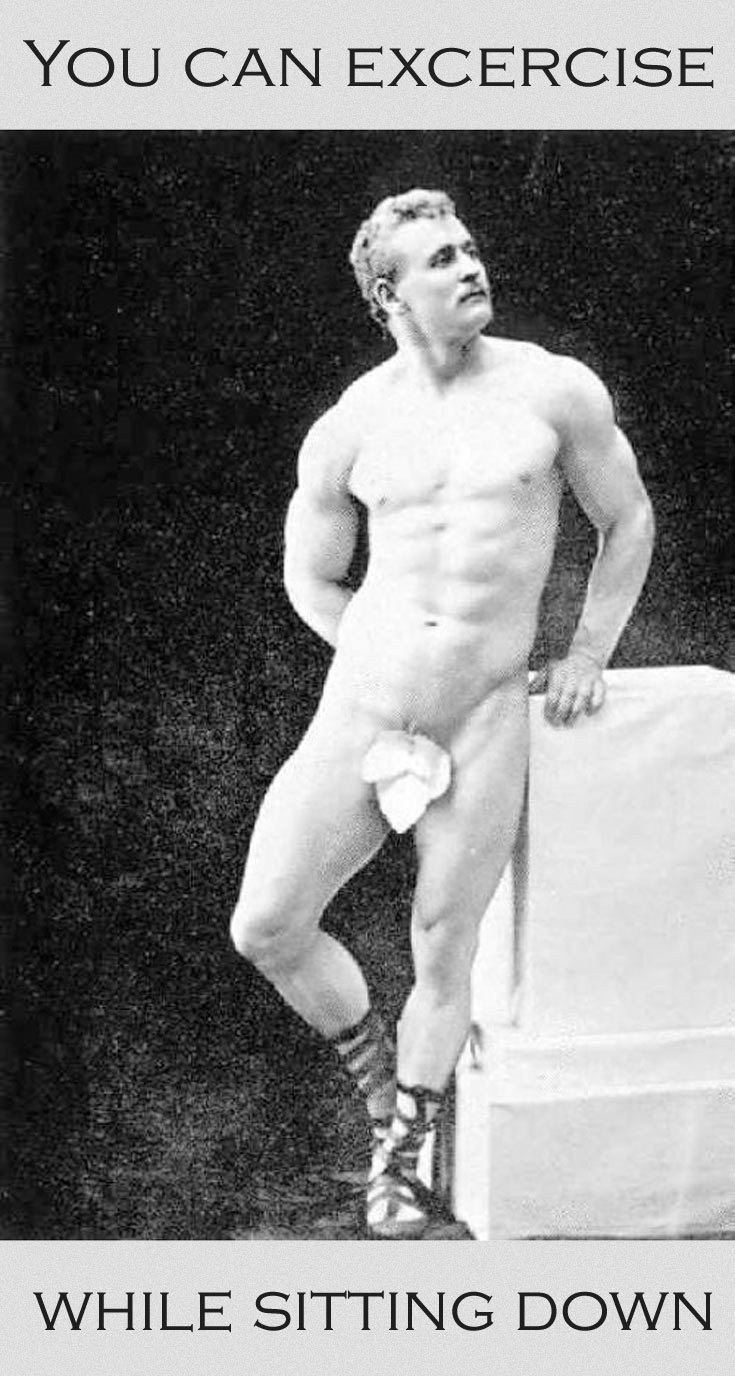 While we know today that you need a balanced fitness regimen (one that includes both cardiovascular exercise and weight training) in order to stay healthy, Sandow was ahead of the curve when it came to incorporating exercise into stationary periods of your daily routine.

2. WOMEN CAN LIFT WEIGHTS, TOO.

The idea that women could become overly masculine or muscle-bound due to weight training was an idea that persisted well into the 20th century, but Sandow was quick to shoot it down:

“The influence of exercise on the bodily frame of women is, strange to say, still indifferently recognized. The prevalent idea is that muscular exercise of any active kind, for a young girl, coarsens and makes a boy of her. The idea is a delusion; mischievous, indeed, when we realize the value to a growing girl of gymnastics, in their milder form of calisthenics; and its evil results are seen not only in the ailments, among many others, to which we have just referred; but also in the absence of comeliness, grace, and that beauty and shapeliness of physical contour which we associate with a perfectly-formed and finely-conditioned woman.” 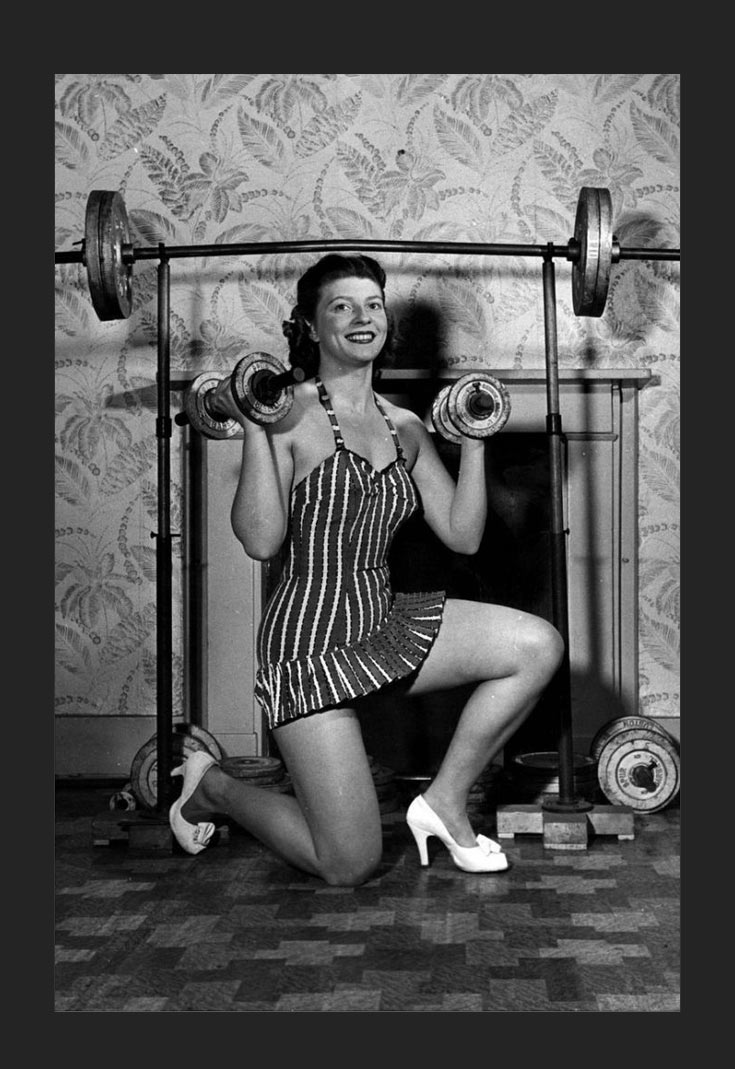 Even though Sandow looked like an anatomy chart, he never endorsed weightlifting for purely aesthetic reasons. Fitness, he wrote, could have a beneficial effect on your digestive system. “Muscular exercise improves the powers of nutrition and stimulates and strengthens the digestive apparatus … a salutary effect can also be exerted on the bowels and intestines, which otherwise not infrequently become torpid,” he wrote. “The effect of exercise on the secretions is no less beneficial, for accelerated circulation, it is well known, hastens the gathering up of the waste matter in the body and its exudation by the great organs of excretion—the skin, the lungs, and the kidneys.”

4. DRYING YOURSELF OFF AFTER A BATH ACTUALLY MAKES YOU COLDER.

While preaching the benefits of a nice, cold bath — something modern researchers have endorsed for recovering from muscle soreness in some instances — Sandow implored his followers not to towel off afterward. Instead, he told them to stop being children and just tolerate being in wet clothes:

“I have no hesitation in saying that this is a great mistake. Let me explain the reason: As you get out of the bath you rub down first one part of the body and then the other, and thus, whilst one part is being warmed by the friction, the other is getting cold. Many people who take cold baths in this way complain of touches of rheumatism, and the whole trouble arises, I believe, from different parts of the body being alternately warmed and chilled…If you do not like the idea of getting into your clothes wet, just take the water off the body as quickly as you possibly can with a dry towel, jump into your clothes, and let Nature restore your circulation in her own way.”

“If I had a boy,” Sandow said, “I should start him with ½-lb. dumb-bells when he was two years old, and then gradually increase the weight with his years. My idea is that boys from ten to twelve should have 3-lb. dumb-bells; from twelve to fifteen, 4-lb.; and from fifteen upwards, I consider 5-lb. dumb-bells quite sufficient for any one … It should be compulsory in all schools for boys to have regular training with dumb-bells, and if this were universal there would soon be a most beneficial change in the physique of the rising generation.” 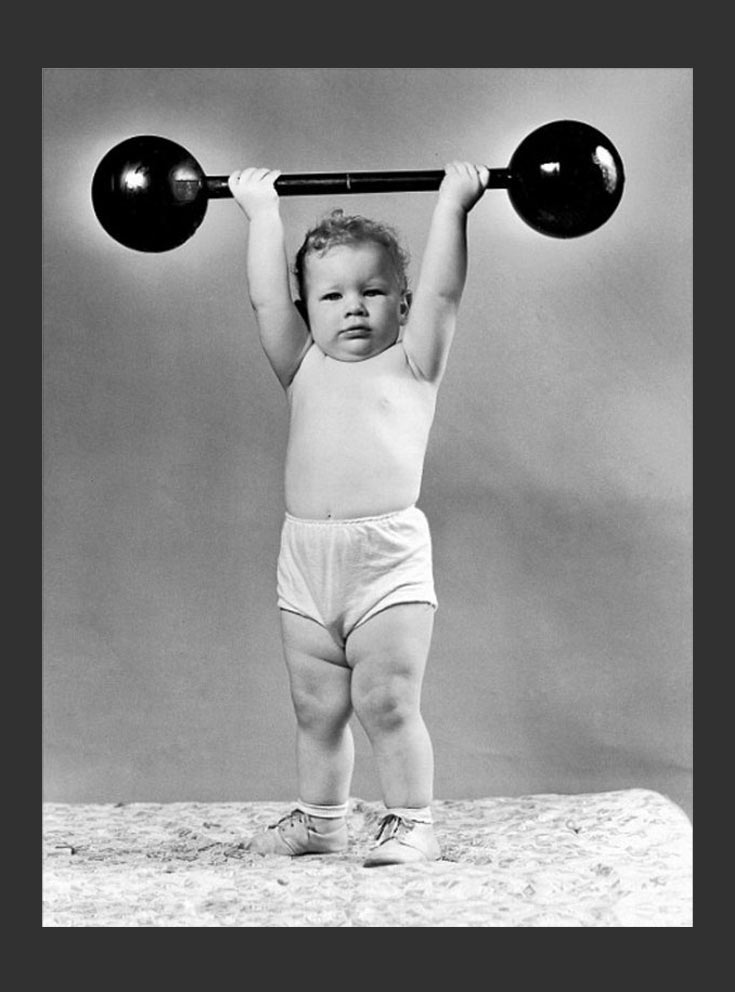 Sandow maintained he achieved his physique strictly through the use of barbells and dumbbells, avoiding any complicated gym apparatus.

“I have never fancied, nor found need for, the elaborate equipment of the modern gymnasium,” he wrote. “Nor have I ever exercised except on the ground, eschewing such appurtenances as the trapezium, the rings, the plank, the ladder, the mast, the vertical pole, and other paraphernalia of gymnastic training.”

7. IT’S OKAY TO CHECK YOURSELF OUT IN THE MIRROR.

“It is desirable to exercise before a looking-glass,” Sandow wrote. “For you can thus follow the movements of the various muscles; and to see the muscles at work, and to mark their steady development, is itself a help and a pleasure.”

Open a bodybuilding magazine today and you’ll see variations on the advice Sandow was passing out from the beginning: Keep weights, rep, and volume mixed up to keep your body in a constant state of response.

“Don’t always train with the same amount of weight,” he wrote. “Some days use more moderate weights to tone the muscles, on other training days really exert yourself, give the muscles plenty of work to do, then nature will take care of building more strength, muscle and better health.” 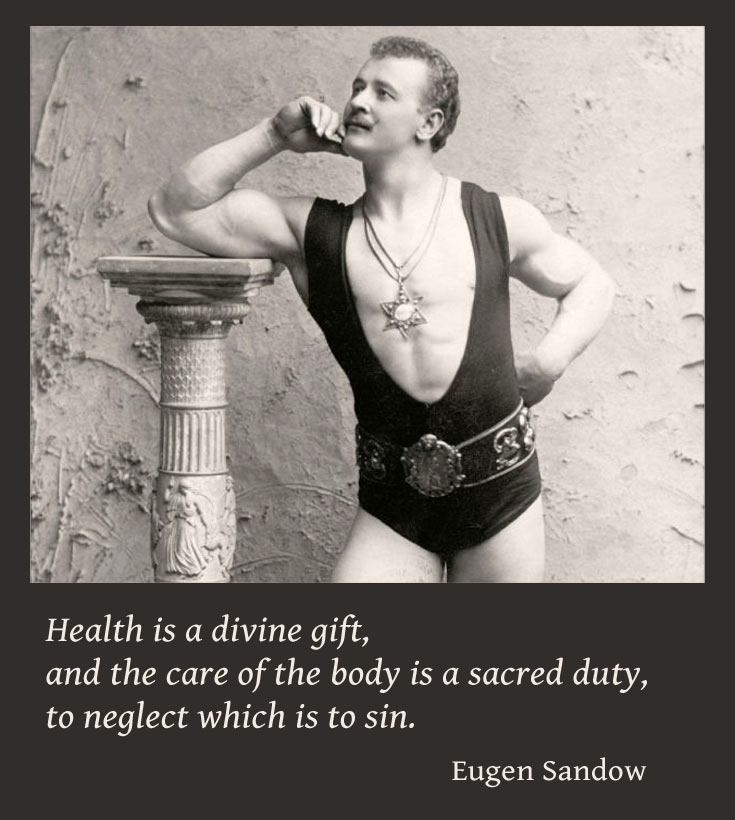 9. REACH FOR WATER INSTEAD OF COFFEE.

“Let me say that tea and coffee contains alkaloids, which are injurious to the nerves and stomach,” Sandow wrote. “I never drink either. Water is nature’s offering to the thirsty, and when distilled can not be improved upon.”

10. MODERATION IS THE KEY TO SUCCESS.

Despite having the body of an action figure, Sandow claimed he never sweated over his diet—he just didn’t enjoy anything in excess. “It may be said at once that I have no belief in special diet. There is no better guide to good living than moderation. Be moderate in all things, and you need fear no interruption in gaining strength by my system of training.”

Sound thinking, although Sandow probably wouldn’t have thrilled the Surgeon General. “A man should be denied nothing which he desires within certain limits,” he once said. “I never refuse myself anything—I take wine, beer, smoke, and take a turn all round as other men who make the most of life … I just eat and drink what I want, when I want, and in what quantities I want.”

11. TAKE YOUR WORKOUT OUTSIDE.

According to Sandow, exercising indoors was a fate to be avoided at all costs:

“Exercise, I would also impress upon the young reader, ought to be taken in a well-ventilated place, not in a contracted bedroom or thronged hall, where the atmosphere is likely either to be close, and therefore poisonous, or contaminated by many breaths, each throwing off at every expiration about twenty cubic inches of impure air, which occasion headaches, labored breathing, and stagnation of the life-processes.”

While Sandow bemoaned the ill effects of a sedentary desk job, he lacked interest in walking for walking’s sake, calling it “tedious” and “defective.” Instead, he advocated bicycling. 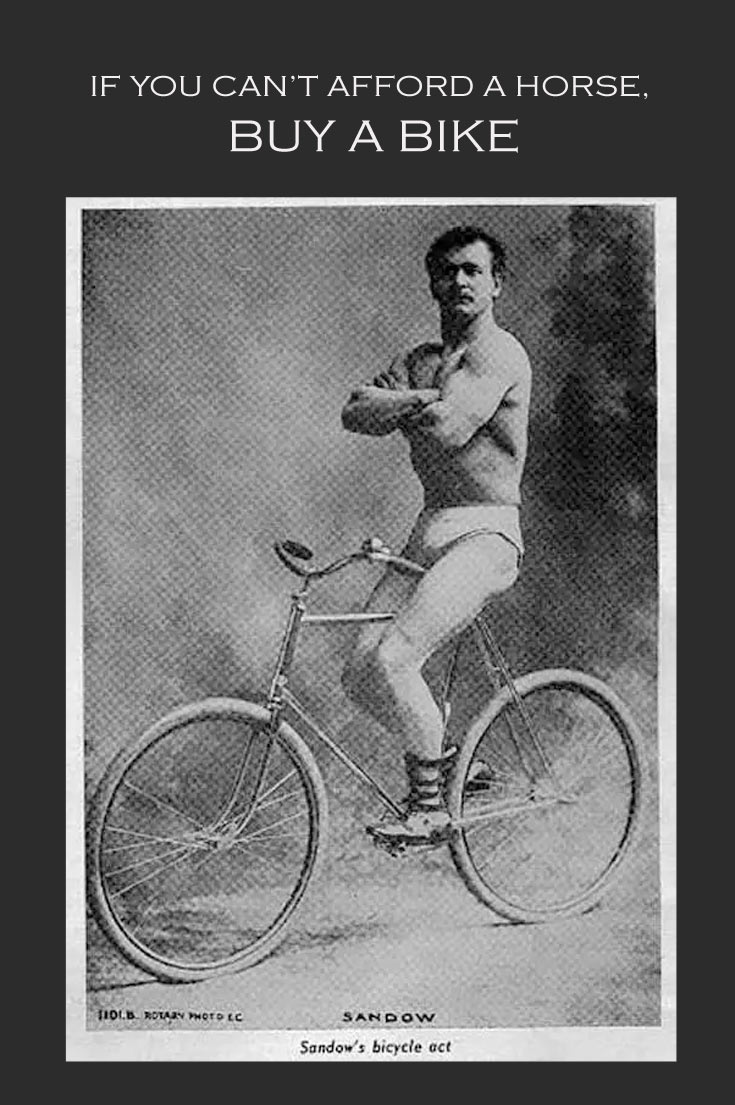 “Each week the bicycler acquires an added skill, and power which could not be done the week before.” And while he found horseback riding “exhilarating,” he admitted bikes would be the more practical mode of transport for most: “A clerk on a salary of fifteen or twenty-five dollars a week, to whom the purchase and keep of a horse would be impracticable, can easily buy a good cycle, which, with reasonable care, should last for many years, requires no feed and almost no expense for keeping it in order.”

13. KEEP YOUR ROOM TOASTY FOR RELAXED MUSCLES AND A GOOD NIGHT’S SLEEP.

Sandow would have had no patience for people who try to conserve energy by crawling into a bed while the ambient temperature is below 50 degrees.

“The surface of the body is chilled and the internal organs congested,” he wrote. “In a warm room one is disposed to disrobe slowly, a sponge bath or a plunge is agreeable, and a little exercise is a pleasure. Then sleep comes gladly and without wooing.”

14. WOMEN SHOULD LOSE THE HEELS.

Calling corsets and small shoes “incalculable evils,” Sandow lobbied for women to rid their wardrobes of clothing that prioritized looks over comfort.

“With these objectionable things discarded, or structurally modified, so that they will not occasion the ills for which they are now responsible, the health and vigor of women would sensibly improve, the resort to cosmetics would become unnecessary, and the nervous disorders and ailing feeling, which deprive the sex of half the joy of life, would vanish.”

Sandow never minced words when it came to the discomfort the pursuit of physical fitness—or life—can sometimes provoke:

“It sometimes happens that a young man or woman, or perhaps a middle aged one, sets out on the course of training with the greatest enthusiasm. After the first two or three days the enthusiasm perhaps wears off. Then comes a period of stiffness, and the pupil is inclined to think that he cannot be bothered to proceed with the course. To such pupils, I would say, in all earnestness, “Don’t be overcome by apparent difficulties; if you wish to succeed, go forward; never draw back.” 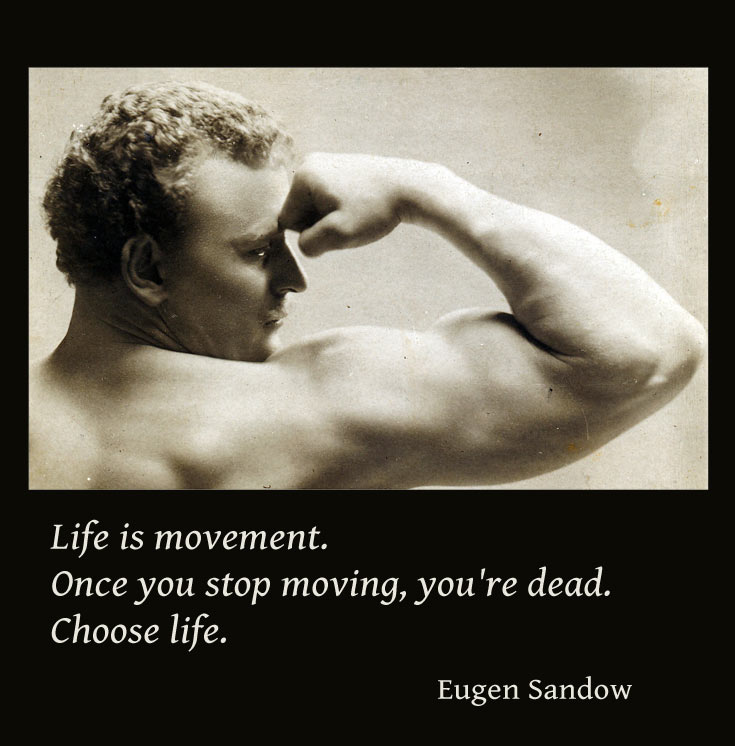